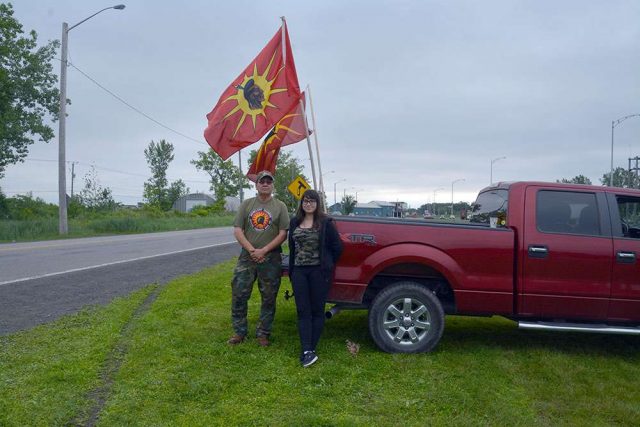 Bryan Deer spent his summer 27 years ago at the barricades on the Mercier Bridge. Tuesday he commemorated that act of resistance with his daughter Kashennoktha at the foot of the same bridge. (Peter Phillips, The Eastern Door)

Early in the morning on July 11th, the Surete du Quebec conducted a raid on the Pines of Kanesatake during what is now known as the Oka Crisis.

In response, the Mohawks of Kahnawake seized the Mercier Bridge and established barricades of their own. Flash-forward 27 years later and Bryan Deer, who was on the bridge at the time, now stands by the Highway 132 up-ramp to commemorate that day.

“We’re doing what we’ve done for the past 25 years. Just coming to commemorate what happened on July 11th in 1990. To let all these people in traffic here know that we’re still here. We stand up for our land, our rights and so they don’t forget what happens if you push us too far,” Deer said.

Warriors and protesters initially repulsed the SQ raid. The seizure and blocking of the Mercier Bridge would halt the possibility of a rapid success for the provincial police.

“They were regrouping and getting ready to go back in so we reacted, so that they wouldn’t go back in and kill them all,” Deer said.

“Obviously it worked because they never went back in that day, they were more worried about the blocking of a major artery and all their forces had to split up,” he continued.

He proudly stood by the field that had just recently hosted the camp protesting the Dakota Access Pipeline.

Along with his daughter Kashennoktha, he listened to K103 Radio as the history of the political crisis was being discussed. They arrived early at six a.m. and began their yearly tradition.

On his truck, Deer erected two Warrior flags and that flew for all passing by to see.

“Especially on K103 right now they’re talking about the hardships because the young people who didn’t hear, weren’t alive at the time or were just babies don’t remember the hardships of getting food into the community,” he said.

Deer’s main point was that he wanted to remind the community as well as the thousands of commuters passing by what happened in the summer of 1990.

He also recalled how American singer-songwriter Steve Earle had sympathized with the cause.

“Since we started, K103 always played a certain song, Copperhead Road by Steve Earle. That’s because he dedicated that to the men who stood up and to the community, he did a concert during 1990 at the Bingo Hall. He dedicated that song to us and played it at a concert a week later when he was in Buffalo,” Deer said.

He also said that during the Buffalo concert, Earle had on a t-shirt supporting the Mohawk cause.

Deer still has in his memory the days he spent as a sentry on the Mercier Bridge.

Up until early September the bridge remained under control of the Warriors, as the tense standoff and negotiations continued.

On Saturday September 1 the barricades came down. The next day Canadian soldiers and Quebec provincial engineers performed safety inspections on the structure and it was deemed safe.

On September 3 there was a brief attempt by 15 Warriors to recapture the bridge but they were repulsed by the Canadian Army.

At last, on September 6 at 10 a.m. the Mercier Bridge was re-opened to commuter traffic.

“In the long run did we get what we wanted? Probably not but it awoke the spirit of all Native people across Turtle Island,” Deer said.