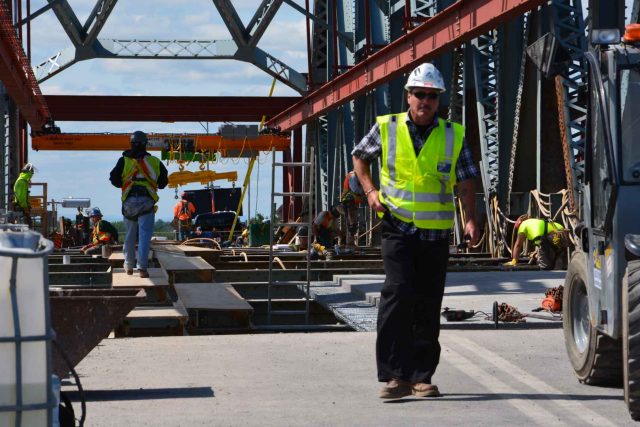 Mohawk Bridge workers are all covered under Kahnawake’s Mohawk Self Insurance, and MBC partner Amy Rice said the cost of ensuring workers are covered is well worth the price tag. (Daniel J. Rowe, The Eastern Door)

Kahnawake Labor Office director Mike O’Brien sat down with The Eastern Door this week to respond to some complaints and concerns regarding the Mohawk Self Insurance (MSI) program.

Last week’s Eastern Door reported the Mohawk Council of Kahnawake signing an agreement with Quebec implementing sections of the Quebec-Kahnawake Labour Agreement, including MSI as having jurisdiction over workers’ compensation.

Some have criticized the program as being forced on the community’s businesses, much like the CNESST (Commission des norms, de l’equite, de la santé et de la securite du travail) program is mandatory for Quebec businesses.

O’Brien explained that workers’ compensation and accident insurance is not just a Quebec thing.

MSI, O’Brien explained, is akin to employment insurance, and not a supplemental group insurance such as the one you would buy at Sun Life or Allstate, and should not be seen as such.

The labour office would like for employers to take their duty as employers more seriously and consider what avoiding insurance means.

“You employ someone, it’s an asset,” said O’Brien. “You insure your vehicles. You insure your building. You don’t want anything to happen to them, and if it does, you want to be able to make sure that you can get something back and get a new one.

“Insuring a person is no different than saying you have a valuable asset you want taken care of, and looking out for them, so they can come back and work for you.”

Self-employed people can chose to enter insurance programs or not across the continent, but once a businessperson becomes an employer, the situation changes.

“As soon as you have employees, that’s why it’s a social thing, those employees are covered by the government, whether it’s a Kahnawake regime, a Quebec regime or a New York regime,” said O’Brien.

O’Brien responded to a criticism of the program not being part of the Kanienkehá:ka culture.

The other important aspect O’Brien wanted to highlight was the fact that Canada and Quebec have always provided workers’ compensation to Kahnawake workers through what is now CNESST (formerly CSST).

“As soon as someone got hurt and went to CSST at the time, CSST would go and assess the company,” said O’Brien, citing a number of examples such as Playground Poker House, Robertson’s Convenience and others.

“Those businesses came to MSI and said, ‘they’re assessing us,’” he said.

O’Brien said he explained to the local businesses that prior to the agreement last month, businesses would need to sign up to MSI so Kahnawake would have jurisdiction.

“We have the jurisdiction. We’re there to take care of the people, and it’s expected that an employer will look out for his own people, morally and socially,” said O’Brien.

Now, all employees who suffer injury, whether the company is paying premiums to MSI or not, will file a claim in the community, and not risk having Revenue Quebec (who took over the CNESST assessment process) intervene.

“We’ve taken away what’s being forced down because you don’t want an assessment by Revenue Quebec. It’s much more damaging in the long run,” said O’Brien.

MSI does not currently have an assessment process similar to Quebec.

“It’s not an assessment in the formal strict sense,” he said. “It’s more of a working out what you have, but we’re just happy to get you on board and paying your fair share to the community, contributing to the community.”

The next step is to create a community law, so the program can be enforced. What businesses need to pay and which may be exempt (small mom and pop convenience stores for example) remain to be determined through the Community Decision-Making Process (CDMP).

“We hope that our people would want to do it because it’s the right thing to do,” said O’Brien.