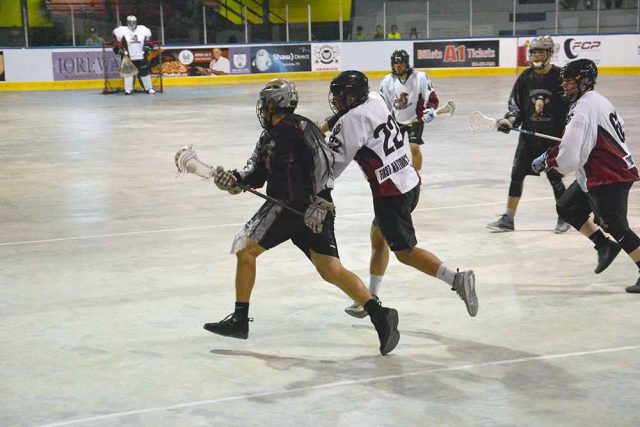 In the battle of the Mohawks, the Hunters and Indians will start their best-of-five series tonight night in Akwesasne. Game two is tomorrow at the Sports Complex. (Daniel J. Rowe, The Eastern Door)

It’s the series both teams and their fans wanted.

The Kahnawake Junior B Hunters, after a decisive and quality three-game sweep of the West Durham Ironheads in round one, head to Akwesasne tonight to face off against Akwesasne Indians in round two of the OJBLL playoffs, the most anticipated series of the year.

It’s going to be good.

“Sasne and us are the two top teams, regardless of what the season determined,” said Hunter forward Alan Singleton.

“It will definitely be the most exciting series in all of the OLA (Ontario Lacrosse Association) playoffs. Both arenas are always packed when we play each other in the regular season. I can’t imagine what the atmosphere will be like in the playoffs.”

Akwesasne won the regular season series, taking three of four games, but Kahnawake’s final game against its fellow Kanienkehá:ka side was a 14-4 blowout with the Hunters were missing several key players.

One such player was Hunters’ leading scorer Cam Horn, who’ll be back, broken finger and all, to take on his fiancé Jenna Thompson’s hometown team.

Both teams proved this season they can work both ends of the floor. The Indian defence will have its collective hands full with Horn, Singleton, Stone Jacobs, and Austin Madronic, just as Kahnawake’s bruising d-men will have to try to hold lights out point machines Russ Oakes (eight goals, 14 assists) and Skye Sunday (12 goals, five assists).

“They got too many breakaways during the series,” he said.

Kerry Kane will be part of that transition unit, who added that the Hunters need to remember that just because it’s an Akwesasne team that won the Founders’ Cup in 2015, doesn’t mean they can’t be beat.

“(We need to) play as a team, stay disciplined and just look at them as another team that’s standing in our way,” said Kane.

Goalies Keron Dickson and Patrick Pollack will be on the receiving end should an Akwesasne attacker get loose, and Dickson knows what his team needs to do to beat the well-oiled and formidable Akwesasne machine.

“We just need to be mentally and physically prepared,” he said. “We have to want it more than them.”

Singleton has complete confidence in his team’s defence and feels the series will be won or lost on the offensive end.

“Our shooting needs to be a lot better,” he said. “Sasne tends to be very good at keeping us away from the net, but they give us the outside shots. We have to take what they give us and bury every opportunity… We need to put up at least 10 goals every game.”

Battle begins tonight at the Anowarako:wa Turtle Dome Arena in Akwesasne at 7 p.m. and tomorrow at the same time in Kahnawake.

Where will you be?