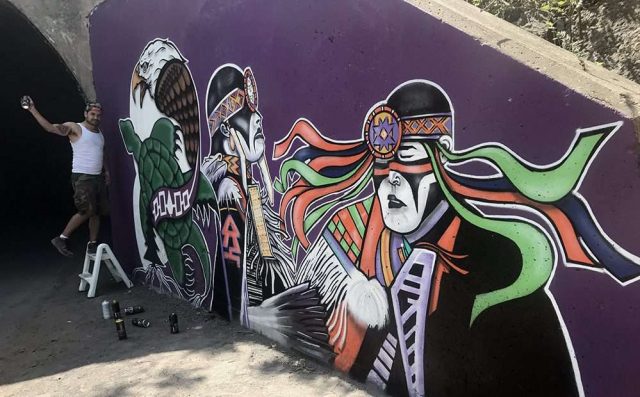 Artist Jye McComber lent his skills to the Echoes of a Proud Nation Powwow. For the past two weeks, he volunteered his time to paint a new mural at the entrance of the CP Rail tunnel to promote this weekend’s powwow. He told The
Eastern Door that part of his motivation was also to clean up the graffiti that plagued the surface previously. (Jessica Deer, The Eastern Door)

Tomorrow at noon, where will you be?

If you are not watching Miss Indian World Raven Swamp among those in the grand entry at the Echoes of a Proud Nation Pow Wow, you are missing out on a key (if not the key) event in Kahnawake’s social calendar.

Swamp, The Eastern Door’s cover girl this year, has been on a tour of events across Onkwehón:we country since being crowned Miss Indian World at the Gathering of Nations in New Mexico in April, and is excited to represent her crown in town.

Tomorrow’s powwow will be a unique chance to share her story with her friends, family and neighbours.

“When I attend other engagements in different territories there is some pressure to get certain points across like how important food security is for Indigenous peoples because all the communities are different,” said Swamp. “But being in Kahnawake, I have a more laid-back feeling. All the community members that set the example for me are here and exercise it daily.”

Organizationally, the crew putting the 27th annual powwow together has the system down after almost three decades organizing the event.

“We’ve got it down pat right now and then things fall apart on the weekend,” joked organizer Lynne Norton.

The main hope for organizers is nice weather. The iPhone weather app changes with the day, but it does look like rain and thunder are a possibility for at least part of the weekend.

Or is it sunshine?

Norton said Montreal mayor Denis Coderre will swing by along with Bolivian ambassador Pablo Guzman Laugier and other notable dignitaries.

Norton said organizers are set for around 80 arts and crafts and 26 food vendors ready to hock their wares.

A must food stop for the day (for this reporter) is the Eric “Dirt” McComber’s fish and game booth.

The Eastern Door pushed for details from son Jamie and wife Paula as to what to expect, and Paula was reticent to give away too much of the surprise.

She did relent in the end after some coaxing and confirmed that sturgeon would be served, and Jamie kept yelling caribou! from the background.

After assuming Jamie was not actually shouting at caribou, Paula elaborated.

“We’re going to be having our perch rolls, and steak dinners; maybe it’s going to be caribou or deer,” said Paula. “We’re very traditional with our meals.”

For crafter Jessica Hernandez, she’s busy getting prepared to set up her booth for the weekend, which is her key locale on the circuit.

“This is by far my most successful powwow,” she said. “I travel to Akwesasne and Six nations, and hopefully Listuguj this year. The powwow is a great networking tool for future business, so I look forward to seeing my customers and meeting new ones.”

The Public Safety Unit confirmed that traffic will flow in both directions in front of the hospital for the weekend, taking some of the congestion fears away.

• For the flag song, Veterans Song and other honoring songs, please stand quietly out of respect.

• The M.C. will direct you when to stand, always remove your hats and head gear. Never pick up a piece of a dancer’s outfit. Point

out the item to the dancer and they will retrieve it.

• Photography is permitted only at certain times, listen to the M.C. for details. If you would like to photograph individuals, ask them for permission first and respect their decision.

• The chairs around the dance floor are for the dancers.

• Do not walk across the dance floor.