Skip to content
You are here
Home > Education > Research dives into Rotinonhsión:ni history of raising steel 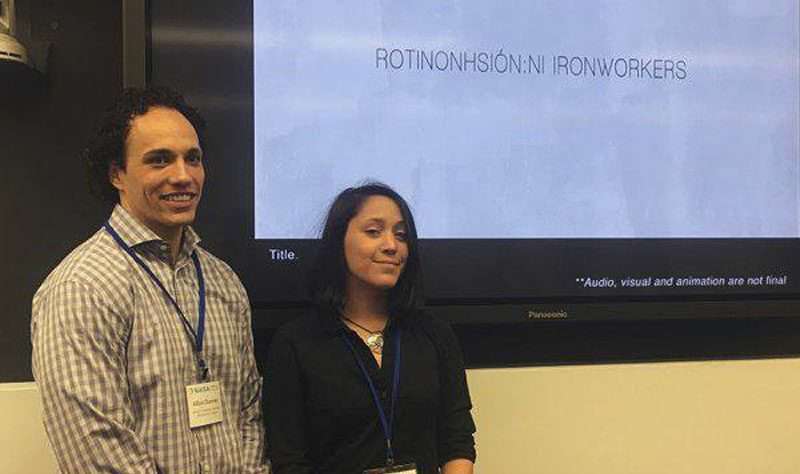 For nearly two years, McGill professor Allan Downey and his research assistant Carlee Loft have spent their time collecting archival material around Rotinonhsión:ni communities and their history with ironworking.

The material is for Downey’s latest research on the subject, which will lead to a digital database of archival material, newspaper articles, and oral histories at the Kanien’kehá:ka Onkwawén:na Raotitióhkwa Language and Cultural Center, and Six Nations Polytechnic.

“What’s significant for any researcher is to make sure that the history of the community never leaves the community, and actually contributes to these archives,” said Downey, an assistant professor in the department of history and classical studies, who said he wants the research to benefit the community first and foremost.

“What I really like about doing this type of project is that it makes the history really accessible to the community. For instance, with this digital database, anybody can walk in, and look up their family name, different locations, different structures, and newspaper articles.”

Loft, a Kanien’kehá:ka student in psychology and Indigenous studies, has also been coding the material by family name, location, structure, and even shortening descriptions of some of the longer academic articles.

“The idea is to create something that is more accessible and more engaging. There’s a ton of academic papers written on ironworkers, Kahnawake, and New York City, but those aren’t always accessible for everyone and it’s not always that engaging,” said Loft.

Downey was interested in the subject while he was researching on his book The Creators Game: Lacrosse, Identity and Indigenous Nationhood, which will be released in November.

“When I was doing all of my lacrosse research, I was getting a lot of really cool stories about ironworkers, people telling me about ironworking, going to New York City, Syracuse and all throughout the northeast,” said Downey.

“A lot of these ironworkers were lacrosse players and vice versa, so there’s this great intertwined history between lacrosse and ironworking, so when I finished the lacrosse work, I was looking for a new project and story to tell – ironworker just seemed like a logical transition.”

A part of the project also includes the creation of a five-minute digitally animated video about the history of ironworkers from Kahnawake. While both are still very much in the beginning stages, Downey and Loft presented their work for the first time at the Native American and Indigenous Studies Association (NAISA) conference last week at the University of British Columbia.

“It was a great venue to get some feedback on what we should pay attention to in the video, what we should change, and what might help improve it. It was a great opportunity for us to have people look at it, to know if they’re understanding the message that we’re trying to portray,” said Downey.

It was the first time Loft attended the annual conference, which is organized as the largest scholarly organization devoted to Indigenous issues and research.

“Going to the conference in general was important because it was an opportunity to meet a ton of different Indigenous scholars, community activists and organizers,” said Loft.

“What was really cool about my panel was that we weren’t presenting finished research – the video itself is only six months into being created. The research has been going on for two years, but it in terms of a massive research project, two years isn’t much.”

Montour ready to make a difference at Concordia