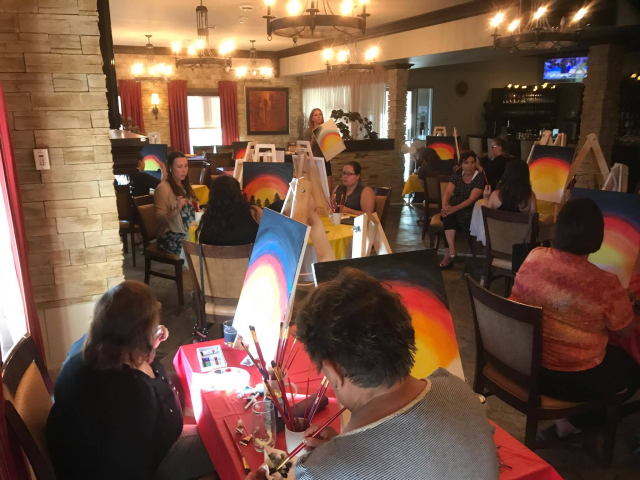 Twenty participants painted works of art on Monday eveningas a part of a fundraising event organized by Walking With Our Sisters Kahnawake. (Courtesy Julie Delisle)

A handful of community members spent their Monday evening painting picturesque sunsets for a good cause.

The fundraising activity, which took place at Xavier’s Steak and Wine Bar, was organized for Walking With Our Sisters, a commemorative art installation that has been touring across Turtle Island for the past five years.

Nearly 2,000 moccasin vamps will be on display at Kateri School next week as a part of the installation to represent and honour the lives of missing and murdered Indigenous women, girls and Two-Spirit people.

“Twenty participants purchased tickets beforehand and this included all painting supplies and a light meal. We had all the canvases set up for participants,” said Julie Delisle, a summer student at the Kanien’kehá:ka Onkwawén:na Raotitióhkwa Language and Cultural Center.

“Tekaronhiahkhwa Margaret Standup was our guest artist. She created the painting for the evening and helped guests by explaining certain painting techniques.”

The event was a success not only to organizers, but participants as well.

“The group was very talented, and the atmosphere was very calming. The artist, Margaret, was very inspiring, and she is a great teacher! She inspired the group to paint what ever our hearts desired. I loved it,” said Lacey-Jo Canadian.

Canadian said she was interested in participating after attending a similar paint night in Montreal a few weeks ago.

“First, I wanted to experience the paint night in the community, by a local artisan,” she said. “Secondly, I bought my ticket to support the fundraiser for the Walking with our Sisters exhibit that is coming to Kahnawake.”

Overall, Monday’s paint party raised $540.50 for Walking With Our Sisters, which was spearheaded by Metis artist Christi Belcourt. In June of 2012, she issued a general call on Facebook for people to create decorated moccasin vamps. By July 25, 2013, over 1,600 vamps were received for its inaugural showing in Edmonton.

The installation takes place in Kahnawake from July 5-12. Although the cultural centre is the host organization bringing the installation to Kahnawake, Walking With Our Sisters is going to be completely volunteer-driven.

“We are still raising money and accepting volunteers so anyone interested is welcome to contact us at KOR,” said Delisle.

Yesterday evening, the group also hosted a Toy and Grocery Bingo at the Knights of Columbus hall as another fundraising initiative.

According to KOR executive director Reaghan Tarbell, who is co-leading the project with Lisa Phillips, hosting the installation has roughly $13,000 in expenses, including the venue rental, food for volunteers and visitors, insurance, promotion, and travel.

“As a part of the responsibility for hosting the installation, we have to bring two members of the national collective to Kahnawake – that’s covering their airfare and putting them up in a hotel,” said Tarbell.

“The other expenses include sending the bundle to the next location. They gave us a rough figure to account for that – $2,500. So, right now we have that earmarked.”

Following its stop in Kahnawake, the installation will be in Toronto in October and then Six Nations at the end of the year.