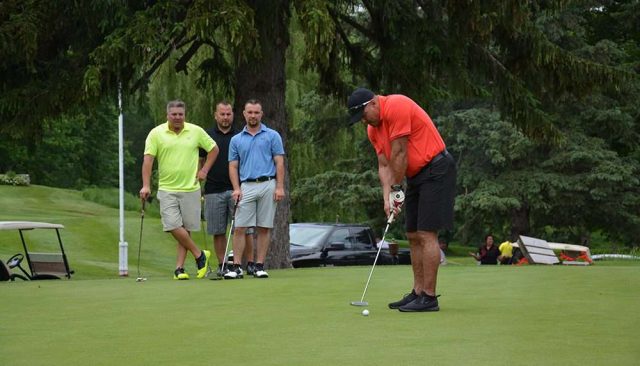 Kenneth Montour, Travis Zachary, Jeffrey Diabo,  and Teken Diabo were among the golfers to hit the greens of Kanawaki on Monday for the Kateri Memorial Foundation’s annual fundraising tournament. (Photos by Daniel J. Rowe, The Eastern Door)

In the premier fundraising event of the year, the Kateri Memorial Foundation came through huge once again, raising over $100,000 for the hospital and Kahnawake’s team heading to the North American Indigenous Games (NAIG) next month.

To start the day, Team Kahnawake’s contingent for the NAIG got a cheque for $40,000, which should take care of the team’s total financial need for the week-long tournament.

“It feels awesome,” said Mackenzie Whyte, head of the team. “We’re so relieved that the foundation decided to partner with us and deemed our cause worth. It definitely given us a lot of breathing room and our athletes are going to be able to just focus more on preparing and going and competing, rather than so much fundraising like we’ve had to do in the past.”

The money will go towards equipment, uniforms, and other costs the team incurs when it travels to Toronto for the week.

“Toronto’s an expensive area, so that will help with that,” said Whyte.

Whyte said the team decided to minimize its fundraising this year, so the community isn’t overtaxed and other sports teams and organizations will not have to compete for dollars. “It’s like a four-ring circus – everything going on at the same time,” she said. “It’s almost like three events in one.”

Montour did get to shoot a few holes of golf on the day before jumping to her other duties.

The golf tournament ran from noon until around 6 p.m. with the $1 million shootout taking place right after.

The team of Cole Skye, Barry Alfred, and the father-son duo Ky and Carl Horn won the tournament at -13.

With the first shot in the shootout, Barry Alfred came closest to nabbing the grand prize, but his ball stopped dead on the wet green, and the cash went unclaimed.

Following the shootout, dinner was served at the Kanawaki dining hall with guests amping up wardrobes from golf shirt chic to black tie formal for the dinner, silent auction and live auction.

Not all auction items and other donations are settled, but Montour confirmed Monday that the foundation met its $63,900 goal for the hospital in addition to the money for the NAIG team.

The money will go towards renovating the hospital’s dental department, which has not had an upgrade for more than 30 years.

“We reached our goal and surpassed our goal,” said Montour. “It (the renovations) wasn’t included in the budget for the renovation and expansion. It was something that needed to be done, so it’ll be a nice beautiful dental clinic to match the rest of our new hospital.”

Tetewataia’takéhnhahs (We Help Each Other) Cancer Support Group was set up also and raised over $5,000 for the group, including a $3,000 donation raised from a recent concert put on by Mouchie Goodleaf Productions.

Check out some more photos from the tournament: