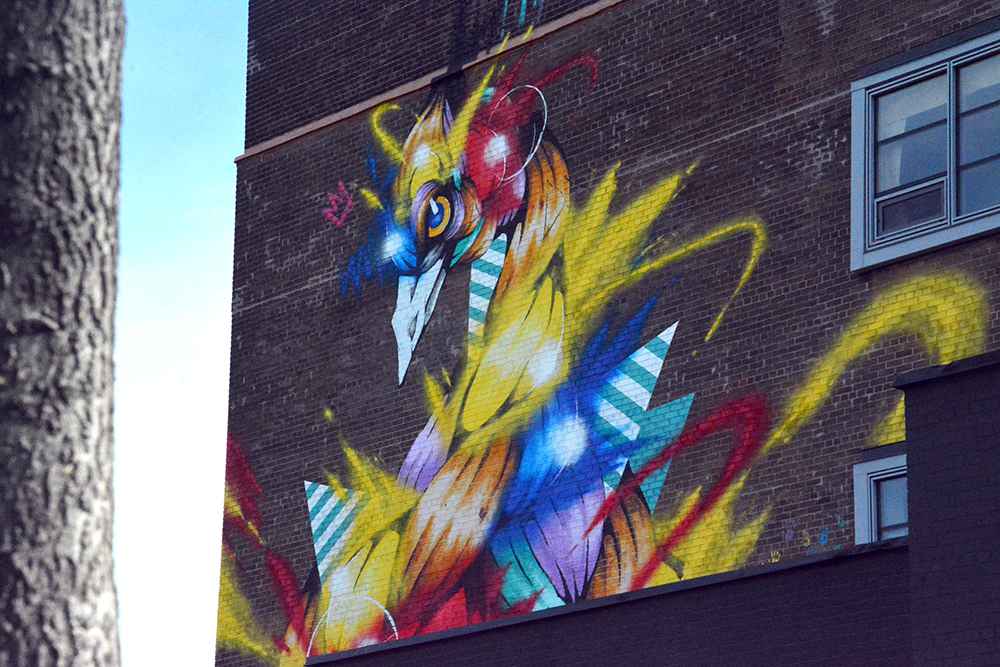 It’s hard to miss the flaming yellow bird, a symbol in support of human rights, overlooking the Lionel Groulx metro painted in dramatic style on the side of 1500 St. Jacques Street in St. Henri.

The mural is the work of Vancouver artist Taka Sudo and includes handprints of those connected to human rights campaigns across the country.

It is a private piece running alongside the Montreal Mural Festival, a celebration of high-end, meticulously planned, wall-sized mural paintings emblazoned on the side of buildings throughout Montreal.

The mother-daughter team of Heidi and Megan Yane contacted Sudo and arranged to have him come produce the work.

“My daughter goes to Dawson, she’s 19, and we did a search across Canada, and realized that they were looking for something that represents human rights, but be community-based, so that we would involve community in the mural and as well that it be intergenerational,” said Heidi Yane, who contacted Sudo and entered his name to be part of the city’s mural festival that is ongoing across Montreal.

The mural includes handprints from people concerned with human rights issues with the youngest, a three-year-old and oldest, 83.

“Everyone had a story,” said Heidi.

The late Max Kapsch’s wife and two children visited with a picture of Max, who was a holocaust survivor, as they added their handprints to the mural.

“It was very emotional for them,” said Heidi.

Another handprint was courtesy of a survivor of the so-called “killing fields” of Cambodia, as well as some caught up in human trafficking and other issues.

Alwyn Morris and Kakaionstha Deer added their handprints that can be seen at the bottom right portion of the main figure.

“It was really, really neat, a great project,” said Morris, who was able to meet the artist. “It’s a great idea.”