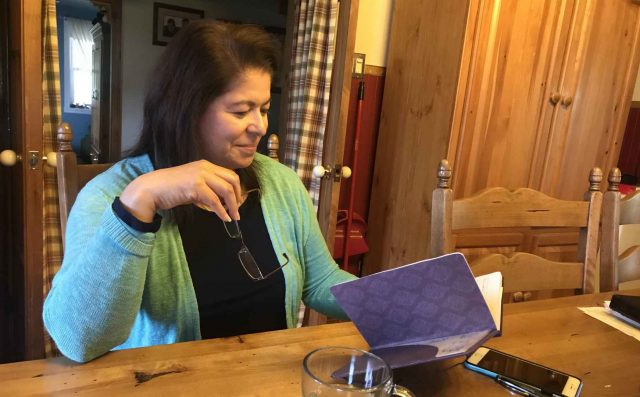 Michelle Phillips began working through the effects of a sexual assault four decades earlier, after running into her assaulter in the most common of situations. (Daniel J. Rowe, The Eastern Door)

Three years ago, Michelle Phillips was south of the border at a car show in Lake George with her husband Brian Goodleaf and son Zach when she saw someone from her past that triggered emotions simmering under the surface for four decades.

“We were just shopping the shops and all the outdoor kiosks that they have. We were walking and Brian ran into this man and his sister,” said Michelle, now 51.

Seeing the man who had sexually assaulted her when she was a child sent shockwaves through Michelle’s system, and made her think she may not have ever dealt with the damage the assault caused.

“I can feel it now, the emotions, how scared I was,” said Michelle. “Even though I was an adult, all of those fears just rushed back. I could smell the barn that we were in. I could smell the hay. I could see the animals because we were feeding horses at the time. All of that just came back and it was so strong.”

Michelle never forgot being targeted by an older boy, though she did not speak openly about it or seek help.

“It was a relative, not a close relative, but someone who lived not even a block away,” said Michelle. “He didn’t rape me. He assaulted me. He tried to (rape me). I have such a strong vision. I remember, I just knew it was wrong. ‘No you can’t. No I will not do this.’ I just shook my head, ‘no.’”

Michelle would not go into gross detail about the assault, but always knew she resisted for a reason, and regrets having to hold it inside for years.

“I knew it was wrong,” she said. “Then, when it was over, I had no one to go to. Even at that young age I knew my mom was incapable of helping me, so I never went to her. I never went to anyone, so I just carried it.”

She was the sixth child born in 1966 to Ida Diabo and Mitchell Phillips, who already had Louis, Kelly, Terry, Roy and Mearl.

Mitchell died before Michelle was born.

“It was always weird,” said Michelle, who was named after her father. “You mourn a loss, but you didn’t lose him that you know of. It’s such a void. It’s hard to explain to somebody else who’s never experienced it.”

Ida, who passed away in 2009, remarried and had two more children: Joe and Cory.

Michelle saw her assaulter often in the community growing up before he left to live elsewhere.

“I kept my distance, so I guess I was afraid of him, but I never felt threatened by him,” she said. “I always knew, don’t get too close to this man.”

Meeting him in 2014 made Michelle realize how much the initial assault had hurt her.

“I was like, ‘what did I miss here? Am I burying something? Was it more traumatic than I thought?’” said Michelle. “I just stood there frozen. I was angry. I was sad. I was enraged, but I was frozen at the same time, and he would not look at me.”

Michelle first had to tell her husband, son and brothers everything.

“It was harder telling Zach,” said Michelle through tears. “Just because I knew he was probably going to be upset, but I knew he had to know. I knew he was strong enough to take my stuff, but just as a mother you don’t want your child to feel your pain.”

“It’s hard to react,” he said. “How do you react when someone was molested as a child? It was just hard for me to process.”

Stewing on the news for a few days, it sunk in more.

For Brian and Michelle’s brothers, the immediate reaction was to find the guy and hurt him.

“Obviously when she first let me in on this traumatic experience that she’d been harbouring for years, my first reaction was to seek revenge of some sort,” said Brian.

Michelle was clear that she did not want any retribution for her assaulter from the men in her family.

For Michelle, she wanted to help herself.

“I couldn’t sleep, I couldn’t eat, and I was like why?” she said. “For heaven’s sake, it’s how many years later? I never denied that it happened. I always knew it was there, and it was like why do I feel like this now?”

After seeking out the name of a therapist from a friend, she decided to try to deal with it, and has been seeing Carol Ann Milch at the Sedona Centre.

Milch has helped Michelle understand that the assault was traumatic, but also what the absence of someone who could protect her at a young age did to her.

“She said ‘I think we need to focus on that,’” said Michelle. “I don’t blame my mother. She was just incapable of helping me… I found out that that was the bigger issue.”

Michelle hopes her story will help those going through a similar issue to seek out help.

Michelle knows there is often an attitude that equates seeking help with weakness, which she knows to be completely false.

“That’s the stigmatism here,” she said. “If you ask for help, you go for help because there’s something wrong, you’re weak. Just manage it. Get over it. How many times did I ever hear something like that? It doesn’t work that way.”

Zach drove his mother to her first counseling session and has been back several times. He is impressed that his mother sought out help she needed.

“That was really good to see, I’m really proud of her for that because I know here in town the culture is just to keep everything in and let bygones be bygones, or the opposite of that – to hold onto grudges forever and never burry the hatchet,” said Zach.

“I was really proud and happy for her that she decided to do actually do something and not keep it inside because that just eats you up.”

Michelle was open about her assaulter when speaking to The Eastern Door, and said she would probably have words with her assaulter, but that they would not be ones of anger.

“Do I hate him? No I don’t hate him. I don’t know what I would do if I saw him today. My feet are a lot more grounded,” said Michelle.