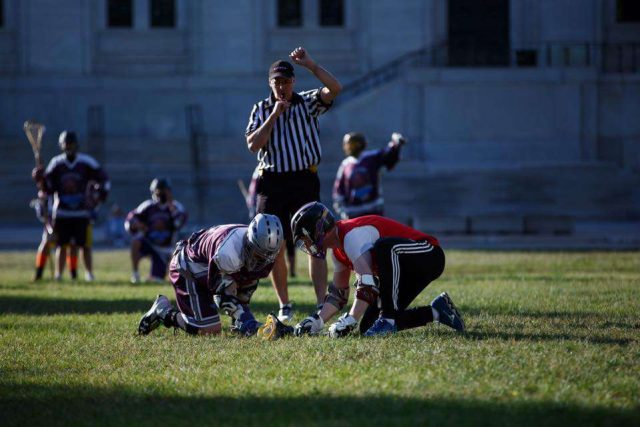 Canadian parliamentarians faced off against a team of Haudenosaunee from Kahnawake on the front lawn of the Supreme Court of Canada and played the Creator’s Game in a celebration of sport, history and friendship. (Courtesy Marc Miller)

In 1855, a Canadian dentist named William George Beers founded the Montreal Lacrosse Club. In 1867 Beers wrote a set of rules to the game, and later that year he pushed to have it named as the official game of Canada.

Of course the Creator’s Game had been played for a centuries by the Haudenosaunee and other Onkwehón:we people in the region. It was the Kanienkehá:ka in Kahnawake who taught Beers how to play the game in the first place.

Fast-forward 150 years, and a team of Haudenosaunee laxers taught a collection of Canadian members of Parliament a lesson in the game in the nation’s capital, as runners wearing Kahnawake Rapids’ jerseys beat an MP team in red 12-4 Wednesday in a non-competitive game on the Supreme Court of Canada’s front lawn.

Derek Stacey was part of the Rapids team, and had a unique opportunity to play with his son Rohahes for the first time.

“It was awesome,” said Derek. “He outscored me.”

The game was part of National Aboriginal History Month, which Miller kicked off by delivering a minute-long speech in Kanien’kéha in parliament that got extensive media coverage both sides of the border.

Miller said he and his fellow MPs were eager to learn more about the origins of the sport (which his son plays), and the informal setting provided the ideal opportunity to chat.

“I’m glad we could do it,” said Miller. “After the speech, they compared it as part of the same thing though. They were notionally different and people made more of it than it actually was, it’s an important gesture, and I think it’s cool.”

Miller added that he believes more parliamentarians need to hit the ground more to learn about Onkwehón:we people and their realities.

“It was a nice experience,” said Derek. “They talked about how our ancestors used lacrosse to settle differences and issues.”

Miller hopes this is not the last such event.

“We’re going to try and make it a yearly thing,” said Miller. “It’s a nice gesture that we’d like to make more frequent… These are gestures that I think are really important, and it was really appreciated by my colleagues.”