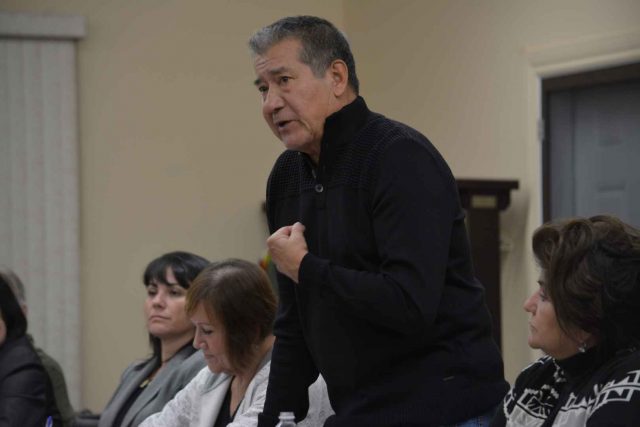 Mohawk council grand chief Joe Norton was in Ottawa last week to tell the Canadian parliament that no matter what changes are made to the Indian Act, “no one will decide for us what we’re going to do.” (file photo)

Mohawk Council of Kahnawake grand chief Joe Norton made it clear to the Standing Committee on Indigenous Affairs that he is not in favour of legislation that would remove some of the sexist provisions in the Indian Act.

Bill S-3, an act to amend the Indian Act (elimination of sex-based inequalities in registration), was introduced in the Senate in 2016 in response to the Descheneaux case – a decision from Quebec Superior Court that stated that the Indian Act’s registration provisions still discriminate against the descendants of Indigenous women.

This is the third time a court has ordered the government to amend the Indian Act to remove sex-based discrimination. The Senate proposed an amendment that would remove all gender-based discrimination from the act. Known as the “6(1)(a) all the way solution. The amendment would include women and their descendants currently excluded by the 1951 cutoff date from previous amendments.

For Norton, the concern is with how the amendments would mean a large increase in the amount of federally-registered Indigenous people that wouldn’t meet the criteria for the Kahnawake Kanien’kehá:ka Registry.

“Many of those people on that list know nothing about us, probably don’t care about us and the only thing they care about is the benefits they will reap once they come into Kahnawake and exercise their rights.”

Norton was the sole dissenting voice to speak on Thursday, which included presentations from a long list of representatives of Quebec Native Women’s Association, Assembly of First Nations of Quebec and Labrador regional chief Ghislain Picard, and advocates for First Nations women like Lynn Gehl, Sharon McIvor, and Pam Palmater.

Norton was critical of their presentations.

“They’re not there representing from a nation point-of-view. Whether Kahnawake is on the right track or not – we have a position, process, and if there’s any disagreements, it’s an internal thing. We’re not going to run to the committee to put it into law,” Norton told The Eastern Door.

“We were at complete odds. They’re supporting something that I am totally against. We have to stand our ground. There are several thousands of people that they want to force us to accept, and we’re not going to do that. We can’t do that, and we have no other position.”

Gehl, a 54-year-old Algonquin woman from Peterborough, Ontario, was denied status because of a provision in the Indian Act that deems a father to be non-Native if his paternity is unstated or listed as unknown on a child’s birth certificate.

“Indigenous women have worked hard to resolve the sex discrimination,” said Gehl. “The Liberal government came into power on the platform of reconciliation and respecting the nation-to-nation relationship. If this government moves forward with the 6-1 remedy as I hope – a remedy that addresses all the sex discriminations in the Indian Act – prime minister Justin Trudeau and minister Carolyn Bennett and the rest of Canada will truly have something to celebrate, otherwise Canada will remain stained.”

With a court-ordered deadline of July 3 looming, Indigenous Affairs minister Carolyn Bennett urged MPs to pass the bill without the amendment, and promised to launch more consultations within six months to address any gender-based discrimination.

While Norton applauded the minister’s criticism of the committee, advocates for First Nations were less than pleased.

“How many more times are you going to require that Indigenous women spend their entire lives trying to get equality in a country that equality is actually the law?” said Palmater, a Mi’kmaq lawyer and chair in Indigenous governance at Ryerson University.

“The fact that the government or any committee would be wondering or considering delaying equality for one more day shows exactly how ingrained sexism is in this country, and for Indigenous women: racism.”