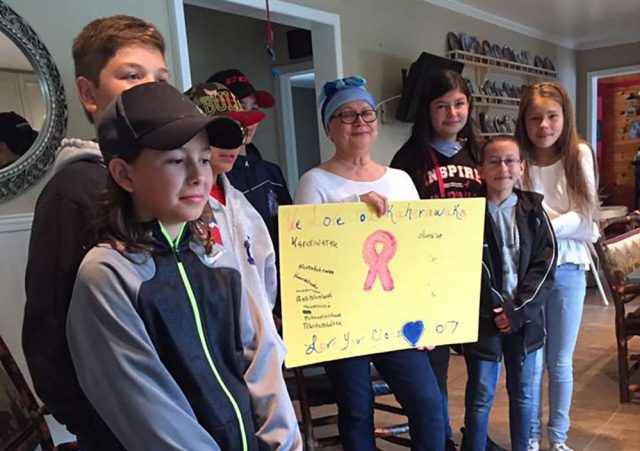 A group of grade five and six students at Karonhianónhnha Tsi Ionteriwaienstáhkhwa decided to raise money for their former teacher who is currently battling breast cancer.

Carol Boyer Jacobs, or Kaherawaks as they know her, was diagnosed with an aggressive form of breast cancer last December, and has been on leave from teaching since January 18.

Her absence was felt by many students, including Christine Jacobs’ son Kanonwatase Lahache.

“He became very concerned for her. He started talking a lot about it and I would answer his questions about cancer,” said Christine.

“One day he came home upset saying that she wouldn’t be coming back this year and that he wants to help her.”

“Kaksatahno:ron had Kaherawaks for grade five and six. She had a really special bond with her since the start,” said Delaronde.

“She is one of those special teachers who come around once in your lifetime, we all have one who truly resonates with us as students and for these children they all felt that way about her.”

The two students were among a small group, with the help of their parents, to raise $2,400 by organizing and selling seconds for the Stanley Cup playoffs.

“As parents we want our children to have empathy for others and we also want them to have a sense of accomplishment. They not only helped Kaherawaks, but in doing so they helped themselves as well, and gained a sense of pride in themselves,” said Christine.

“My son says he loves his teacher and school hasn’t been the same without her. Kaherawaks made him love to read, and she made learning fun, out of all the teachers he’s ever had – she’s definitely made the biggest impact on him. He wanted to help her so she can worry more about herself and her family instead of other expenses.”

The students dropped off their donation and poster-sized get-well card to Boyer Jacobs on Saturday afternoon.

“It was very emotional,” she told The Eastern Door.

Boyer Jacobs has worked at Karonhianónhnha for the past 30 years.

“Every year is special, but for the last few years I’ve been having them for two years – they’re like family. Some of them were with me for their second year, and some would have been with me next year – but, I’m off indefinitely right now because of treatments,” she said.

Up until August, she’ll be undergoing chemotherapy once a week, with radiotherapy to follow afterwards in September.

“The first part was a big transition. It was difficult because of the nature of the beast. I had aggressive cancer and they had to treat it aggressively, so every second week I had treatments for an eight-week cycle. Now, I’m on 12 weeks of weekly chemo,” she said.

It is also the second time she’s fighting cancer, having beaten thyroid cancer 11 years ago.

Some of her students even decided to focus on cancer for their science fair projects this year.

“One did breast cancer, one did cancer in general and another did cancer because her family pet had it as well. It really had an affect on them when they found out what I had. They’re asking questions too – what’s wrong with their environment that they’re seeing so much of this?” she said.

Students from her class aren’t the only ones fundraising. Family and friends also organized a half-and-half raffle and she has been overwhelmed with the outpour of support in recent weeks.

“I can’t believe it. When it comes to community helping their own – I’m overwhelmed by the support, not just in fundraising. Friends and family have come to support me in different ways, whether it is coming to the hospital, bringing soup, kind words, or offering different services. That’s what community and family is all about,” said Boyer Jacobs.