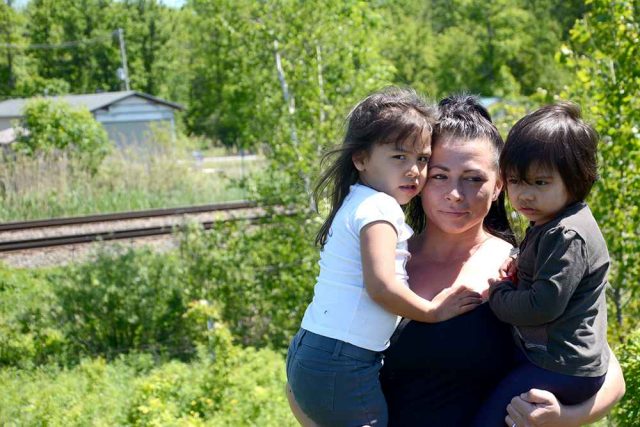 Sonya Dee Cross (with children Karihwiiostha, 4, and Konwaronhiatakwen, 2) started a Facebook group with concerns about herbicides used to clear vegetation near the train tracks. CP Rail says the spray is virtually harmless for residents. (Daniel J. Rowe, The Eastern Door)

Each year, CP Rail sprays herbicides along its tracks to control grass and weeds along the lines, which can hinder rail maintenance and be a hazard for safe train travel.

Spraying was scheduled for last week, but was delayed due to weather, and this week, the Mohawk Council of Kahnawake received a letter of complaint from community members concerned about the potential effects the chemicals used in the process could have.

Some community members have vocalized concerns about chemicals used in the spraying taking primarily to Facebook to voice frustration.

“Many small children live by these tracks, and I have had many health issues since living here,” said Sonya Dee Cross, who was part of the group that sent a complaint letter, and started the page “Kahnawake no spraying” on Facebook.

Halting spraying for weather is one safety precaution CP Rail takes to limit exposure to the chemicals.

The company delivered a presentation to the Mohawk Council with staff from the Kahnawake Environment Protection Office (KEPO) in attendance asking questions about what further could be done to limit exposure to the chemicals.

Lazare shared a letter from KEPO that outlined the consultations it had with CP Rail.

In addition to waiting until winds are low and there is no rain, spraying is done using a shroud so that a minimal area is sprayed. A Computer and GPS system also monitor the spray vehicle.

The chemicals are absorbed into the ground within hours of application and, according to CP, do not have adverse health effects.

There is a 39-page outline of the spraying process on CP’s website, www.cpr.ca.

Lazare explained that the spray used in Kahnawake is a combination of Clearview, Torpedo and VP 480 herbicides. Fact sheets from the companies caution that direct contact with the product may cause eye and skin irritation, and prolonged inhalation may have adverse effects, but do not list any long-term or serious health risks.

“CP has thousands of miles of track and here in Kahnawake we have three miles,” said Lazare. “They spray with the minimum amount necessary. There was a request to spray every second year, but they would have to double the dose, and council said, ‘no.’”