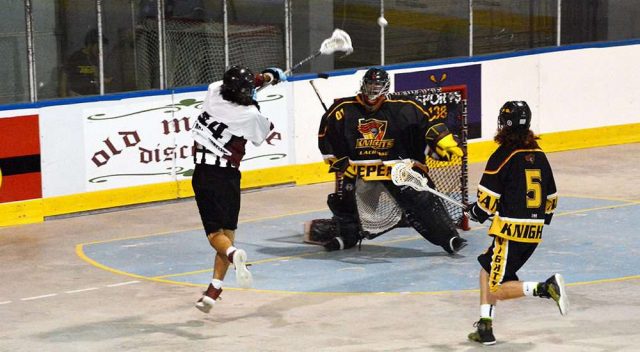 Hunter Shako Kirby and the rest of Kahnawake’s penalty killers had more work to do on Tuesday than typical this season, but the boys in burgundy and white pulled out a much-needed win to snap the losing streak. (Daniel J. Rowe, The Eastern Door)

Two losses on the bounce, assistant coach Kaheriios Montour said the Kahnawake Jr. B Hunters needed a win over the lowly Nepean Knights “bad” Tuesday night at the Sports Complex.

The Hunters jumped on Nepean early and often, and sealed a much-needed 14-8 win as the Ontario Jr. B Lacrosse League (OJBLL) playoffs approach.

“It’s good to put up 14 against this team after putting up only four last week,” “Obviously we improved in just a week.”

The Hunters lost to the same Nepean team the week before 8-4 in an uncharacteristically poor offensive contest.

Defensive standout Shako Kirby was solid all game and forced to kill more penalties than Kahnawake has been used to this season.

Kirby scored a slick short-handed goal with his side playing down two men, as Nepean was pushing in the third period.

“The team plays how we have to play here and there, and with a man down that’s what it comes to sometimes,” he said. “It was probably our best game with a man down. Just getting out quick is what you gotta do.”

Kahnawake followed Tuesday’s commanding win by eking out an away win in Gloucester 13-12 against the Griffins.

That means two wins back-to-back after losing two, including a home game to the very strong and tough Green Gaels of Clarington 9-6 Saturday.

Montour, who won an OJBLL championship with the Akwesasne Indians two years ago, said although Kahnawake lost Saturday, the game showed the team’s ability to run with the big boys.

“(It teaches us) that games like that and teams like that are what it’s going to take to get to the ultimate goal, to win a championship,” he said. “Those big, strong, fast physical teams, you got to be ready. That’s all your playing the whole second season.”

Montour did not appreciate the penalties Tuesday, however, and knows the team needs to not play with a man down, especially as the playoffs loom.

“It’s a little frustrating, especially unnecessary penalties,” said Montour. “On certain plays, you have to do it to prevent a goal, but certain ones where you’re nowhere near the play and you just pop a guy, those are the kind of things we got to stay away from, especially when the games are closer and it’s going to matter that much more.”

The Hunters are noticeably bigger and stronger, particularly on the defensive end.

In addition to Kirby, who returned from Onondaga Community College to suit up, the Hunters also added a giant in no. 21 Clayton Messmer, whose presence in the middle was felt early by a few Nepean forwards.

“It’s what we were missing, a big intimidating guy,” said Montour. “It’s good he can play with that woodie too. That definitely helps. They don’t want to come through the middle.”

Kahnawake heads on the road for the weekend with games in Brampton tomorrow and Mississauga Sunday.

Wins on the weekend would all but assure a strong playoff position.

“With the team we have, I’m feeling strong and confident in all our players,” said Kirby. “I feel like we’ve got a good chance here in the playoffs, and we’ll see what we can do with that.”