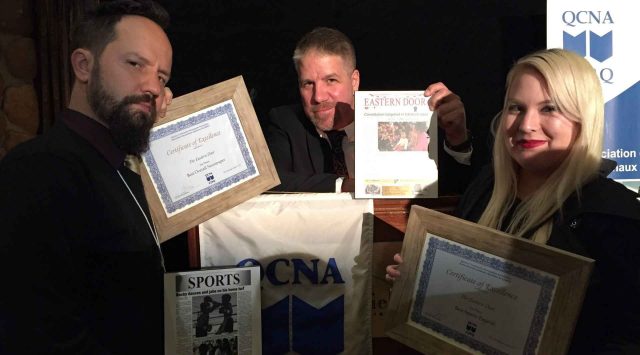 The Eastern Door took home best overall newspaper at the Quebec Community Newspapers Association’s awards last Friday, and with it, made history.

It was the first time an Onkwehón:we newspaper won the prestigious award in the QCNA’s 37-year history, and the first time TED won first place in its 25 years – against newspapers with as much as 100 times TED’s print circulation.

“I am in awe, but not in shock,” said TED editor/publisher Steve Bonspiel. “Why? Because I believe in my entire staff and we have two reporters who don’t just rely on “good enough,” who push for the truth, who go more in-depth, and who never stop digging.”

It comes on the heels of The Eastern Door’s best overall newspaper award win at the national association, the Canadian Community Newspapers Association, as TED won that one for the second year in a row.

“This is the best year The Eastern Door has ever had,” said Bonspiel. “And a lot of it is thanks to our community. You tell us your stories, send us your news tips, and you support us by buying an ad or the newspaper each week. We’re a small Kanien’kehá:ka newspaper that has a large following here and across Turtle Island.”

“Since editorial is the backbone of any newspaper inclusion of senior editorial staff photos as part of the editorial masthead demonstrates the paper places a very strong emphasis on content and reader input,” judge Maurice Rees, a publisher from Nova Scotia wrote in deeming TED best overall in the QCNA.

“It’s always a nice feeling to be recognized for your work, but I wouldn’t have a story to write without the incredible stories that come out of this community, and everyone who takes the time to speak with me (even if it’s reluctantly),” said reporter Jessica Deer, who won first place for best business story on traffic problems on Route 207 titled “Traffic on 207 leads to protest.”

“This story is well written and easy to read. It gets to the heart of a community issue, exposing conflicting opinions that affects business and quality of life in the community ” wrote judge Andrea Hunter, a Concordia university professor.

“Indigenous people across Canada have endured a longstanding history of having their voices absent in journalism, so I’m incredibly proud to be a part of such an awesome team at The Eastern Door that creates space for stories about Onkwehón:we people’s perspectives on all sorts of issues that affect us,” Deer said about making history for Kahnawake.

TED also won the much-coveted best sports pages, beating out the Quebec Chronicle-Telegraph, which finished second, to go along with a third place for best feature page.

“For all the sports stars and would-be stars in Kahnawake, it was nice to finally crack the egg and nab the top spot for best sports section,” said Assistant editor Daniel J. Rowe, who writes the majority of TED’s sports stories.

“The win, though, is really for all Kahnawake’s sports stars, who put up with the pestering for comments and pics all year.”

“The series on fentanyl and other drug abuse was not the most comfortable or easiest to write, but it’s an important topic. The hope is that it helped to inform,” Rowe said of his best feature series nod.

Megan Whyte also made history for herself, winning best editorial cartoon for the first time.

“My cartoon was a critique of prime minister Justin Trudeau’s stance on First Nations issues. My drawing was an ode to remember the roots and to think critically when global statements are made,” said Whyte.

“I think it’s powerful to have The Eastern Door win best paper because it validates, recognizes and gives space for the Indigenous voice to speak.”

“My role is no longer to win awards, but when I do, it’s always nice,” said Bonspiel. “I’m here to help others win, including last year’s best overall journalist award, won by Daniel J. Rowe.”

Deer, Rowe, Bonspiel and graphic designer Dana Marquis combined to finish second for best headline writing for such gems as “Winter community meeting called because of ….winter,” and “Mohawk Girls up Schitt’s Creek.”