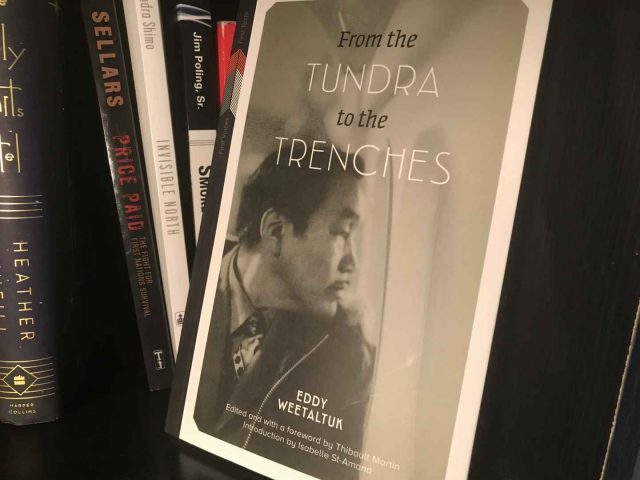 The isolated, frigid, poverty-struck Strutton Island in the James Bay is where the story begins for Eddy Weetaltuk. At the time, he was just a young Inuk who lived off the land with his family. By the end of his journey, he travelled abroad to Japan, Korea, Germany and the Netherlands and became a member of the Canadian Army.

“It is likely that my long adventures around the world are the result of my desire to free myself from the risk of starvation and poverty.”

Throughout the book he remains a man who cannot escape the past. After being educated at a Catholic missionary, he learned to speak English, French and Cree in addition to already knowing Inuktitut. After finishing school he found several odd jobs until he decided to give the army a try.

At the time, Inuit were not allowed to join the army, as they were unable to leave northern Canada. He changed his name pretending to be part French Canadian and so he became Private Eddy Vital.

“I had abandoned my Inuit identity for a White man’s name,” he lamented.

Weetaltuk’s memoir flows constantly with a heavy undercurrent of melancholy. Whether he’s out with his father on James Bay, trudging through military training or reminiscing about lost love, his work is ripe with conflicting emotions.

“Each time we would recall these memories, tears of joy and laughter rolled down my cheeks.”

It was an immense struggle to hide his true identity and yet to also remember where he really came from. Above all he wanted to show bravery and what is truly remarkable is his sense of humbleness.

He got his chance in 1952, where he served as a mortar operator in the Korean War from 1952-1953. When he arrived in Japan before heading off to war, he began to question the politics of war.

“I was recalling the horrors we were told about the Japanese when I was in school, and I began to wonder what is true in what we say about other people.”

Along with his other comrades in the army, he experienced for the first time the terror and angst of battle.

“You get used to the bombs, they become part of your life, but silence is unbearable.”

While operating a 60mm mortar with two other soldiers, he was also tasked with digging trenches in the dark while artillery peppered the ground all around him, even witnessing the dreaded napalm strikes.

“When the napalm hit the ground, the sky ripped apart as if it was Judgment Day.”

Weetaltuk spent roughly one year in the trenches of Korea, serving alongside American and British troops. It was not just the war itself that had impacted him, but also his interactions with the Koreans and Japanese who sometimes mistook him for one of their own. The fighting left him with mixed emotions on what was being accomplished.

“Thanks to my travels, I have learnt that no one can change the world, not even through war.”

Until 1967, he continued his service in Western Canada and eventually in West Germany. In the end, he chose to settle in Great Whale, Quebec where much of his community had settled. He died in 2005 and the memoir was produced posthumously in 2016. A remarkable tale long overdue.