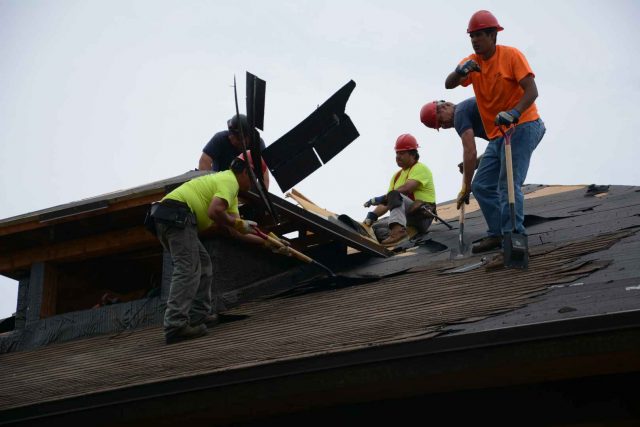 Construction of the new roof began last week, and will finish in July or August. (Daniel J. Rowe, The Eastern Door)

After years of issues and repairs, Step By Step Child and Family Center is finally getting a new roof. Installation of a new, tin roof began last week and will likely be finished by the end of July or beginning of August.

“We’ve had problems over the years and it was really affecting the classrooms because having to move all your kids and go into a different locale and everything – it was very disturbing and not very conducive to a great learning environment when you’re constantly worrying about the roof,” said Step By Step executive director Natalie Beauvais.

The roof situation had gotten to the point where teachers and students would have to strategically place their work around the classroom and on classroom walls, to avoid water damage from the leaks in certain problematic areas.

“We don’t have to worry about that anymore. We’ve always continued to focus on the programming, but now we’re not going to have this other thing hanging over us. Every time it rained, we’d cringe and wonder what to anticipate and it was always something that was bothering us,” Beauvais said.

She added that they feared one of the leaks would cause water to go through their heating system, which would be hazardous. Getting the roof replaced was key for the safety of all.

Step By Step had been having issues for several years and owing to having it repeatedly repaired, it was discovered that the tiles were defective. Rather than following through with a class-action law suit, the school decided a new roof should be purchased.

As the community began hearing of their fundraising efforts, it was suggested that they aim higher and opt for a tin roof – a roof that would last them much longer.

“We thought, oh my goodness, a tin roof that would just be wonderful because then a tin roof can sometimes last 40 to 50 years, if not more, and that would be definitely the ideal situation. However, we knew the cost would be quite a bit more than what we were able to get,” Beauvais explained.

The Mohawk Council of Kahnawake came forward last year, offering to help with the new roof. They would help provide an engineer for the site and would take it on as a capital project, helping to finance the difference.

The installation of a new roof has been a major relief for students, staff and parents alike. Beauvais said that there have been no issues with the construction up to this point, and teachers have continued with their lessons without any disruptions. No classrooms had to be moved.

The only changes students do face are interruptions to their naptime, and not being able to go in the yard on some days for safety reasons.

“Kids are so resilient. They adjust so well. Everybody’s been accommodating and understanding and working together because they all know that the roof is needed. It’s not really up for debate that it’s a necessity and we need to get it done.

Beauvais feels grateful to the entire community for their help in getting the roof replaced.