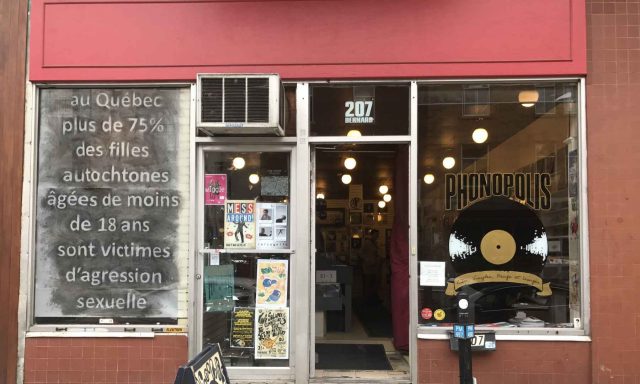 The Montreal 375 celebration has been a mix of parties, reflection and some reconciliation, and artist Hannah Claus’s “je me souviens” series of window displays draws dramatic attention to the missing and murdered Indigenous women in Quebec and Canada. (Daniel J. Rowe, The Eastern Door)

Each week, the piece is different, but each week Hannah Claus’ piece in her series “je me souviens” reminds those who catch the image in windows across Montreal that the missing and murdered Indigenous women crisis in Canada remains an unresolved issue.

Claus’ work is part of Les fenetres qui parlent (the windows that talk), an ambitious art installation project that is part of the Montreal 375 anniversary celebrations. The project includes 40 windows in Montreal’s 19 boroughs over 19 weeks with artists’ work alternating between the locations.

Claus is one of 35 artists who had or will have their work displayed on the Plaza St. Huber Jean Talon Market corner.

“Works of art provide an unexpected experience to residents and passers-by, creating encounters and inviting viewers to ask questions about the art and the space it inhabits,” reads a statement from curator Andre Henault. “That’s what Les fenetres qui parlent 2017 is all about: artists using urban spaces lent by residents, and artworks and the spaces they occupy enhancing each other.”

Claus’ work alternates between a montage of 812 names of missing or murdered Indigenous women collected for a separate video installation that was part of Printemps Autochthone two years ago.

The other display (like the one pictured above) includes text-based pieces using newspapers, protests and official reports revealing stark realities about Indigenous women and girls’ lives in the province.

“When I was asked to do this, in part I was thinking about 375 and hearing all the ‘rah rah,’ and feeling like, listen, there are real things going on and the inquiry is going to be starting up, and you don’t hear much about that at all,” said Claus, a Kanienkehá:ka living in Montreal. “It seems there are problems before it even starts and this is still an ongoing issue.”

The collage of names, some of which community members wrote at the Kanien’kehá:ka Onkwawén:na Raotitióhkwa Language and Cultural Center, were a way Claus could respond to the project’s title calling on windows to speak.

“I thought, let’s have the windows really speak if I’m going to do this,” said Claus. “It’s this idea of bringing those communities, people for whom this is an immediate and real thing, and bringing it into the other communities that make up this city because it’s something that should affect all of us.”

The text-based pieces reveal the hard and bitter realities for many Indigenous women taken from reports compiled by the Quebec Native Women and other organizations.

The display that ended Wednesday, at the Phonopolis record store on Bernard Avenue, gave Mile End residents and shoppers in the trendy area a chance to reflect on the chilling stat that over 75 percent of young Indigenous women under the age of 18 in Quebec are victims of sexual assault.

“I didn’t want it to be a bitter/sweet memorial or something. I wanted it to really make people aware and to make people talk,” said Claus. “I thought it was important to include some of these facts, sentences and messages to be specific to Quebec because often there are people saying that it’s something happening out west, and it’s not an issue here.”

Claus said those who volunteered windows and have engaged with her work have been supportive and happy to be a part of her work both in the residence that showed her work in the first week, and the business (Phonopolis) in the second.

“Generally with this project, I definitely let the people know beforehand what the topic is and the concept, so that they’re aware of what I’ve got going on and that they support the idea and support the work before it goes up,” said Claus, who adds tobacco on the inside of the window with the names to ground them.

The work will soon show at all 19 boroughs, and Claus is excited to see the reaction from those displaying the work, and any who might see it and comment.

“It’s really jumping all over the island, which is really interesting,” said Claus. “It’ll be interesting to see how it’s received in different neighbourhoods.”

The complete schedule and program can be found at www.fpqmontreal.ca, and Claus’ work is on display this week at 14751 Notre Dame Est in Pointes aux Trembles.