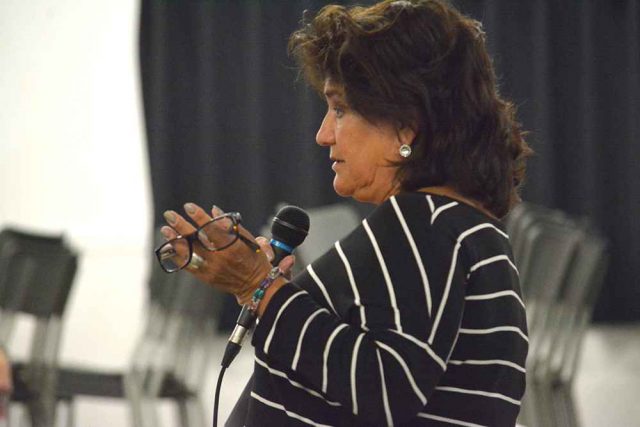 The proposed Kahnawake Residency Law received a mandate to proceed through the Community Decision-Making Process as urgent legislation this week.

Consensus by three-dozen community members was reached, on Tuesday evening, during the proposed law’s first consultation hearing, which was held at the Knights of Columbus hall.

“The residency law establishes a system to control the residency of non-members within Kahnawake. Residency is a privilege of temporary residency to non-members who meet the criteria in the law,” said Mohawk Council of Kahnawake chief Rhonda Kirby, who submitted the request for legislation to the Kahnawake Legislative Coordinating Commission (KLCC) last year.

“What we’re trying to do is find out who all these people are that are living here. If they’re from another community, they should be allowed to live here – but we need to know what they’re doing here, where they’re living and who they’re living with and why they’re here.”

According to results of a recent survey conducted and discussion at past community meetings, Kirby said the starting point for residency would include people who do not meet the Kahnawake Kanien’kehá:ka Registry (KKR) eligibility criteria. If they have status by the federal government and grew up in Kahnawake, as well as other Indigenous people who married, live in common law with a member or are working or attending an educational facility in the community, they are eligible for residency.

“The eligibility criteria may include submitting to a criminal background check, provide proof of where and with whom you will reside, reasons you desire to reside in Kahnawake and signing a waiver that you agree to abide by Kahnawake’s laws and regulations for residency requirements,” explained Kirby.

Before consensus was reached on the purpose and scope of the law, there was a lengthy discussion regarding the proposed eligibility criteria for “people registered with Canada, with some lineage and grew up in Kahnawake,”

“Some is too vague,” said a community member during the discussion.

“If they grew up here, c’mon people, you can’t throw them out. That’s all there is to it. There are a lot of people here who don’t meet the KKR criteria, and they’re a part of our community,” said another in attendance. “Let’s not disregard the growing up in Kahnawake part. These people live here. Whether they have three great-grandparents, one great-grandparent, they’re here and they should be able to have residency.”

Others felt it would leave too much room for those denied residency to appeal their case.

“What we’re trying to do here is build a law that is strong as we can, so that it is valid, and avoid pitfalls where it’s easy to appeal,” said the community member. “I know we have such great hearts and talk about that they grew up in Kahnawake, but maybe they weren’t eligible to live in Kahnawake.”

By the end of the discussion, facilitators proposed, and accepted by consensus, that the mandate be given with the proviso that the drafting team will include a number of options in the draft law when it becomes available. It will then be discussed and debated when the CDMP resumes.

Consensus was also reached on Tuesday that the proposed law be categorized as Type One – Urgent.

“It is a Type 1 because it affects the entire community and has consequences on the community as a whole that could affect our basic human rights,” said Leslie Beauvais-Skye, KLCC coordinator.

“It’s also urgent because the law was based on the Descheneaux decision that poses an external, imminent objective threat to the social and cultural security and identity of the Kanien’kehá:ka of Kahnawake.”

The decision, made by a Superior Court judge, orders the federal government to make amendments to remove gender discrimination from the Indian Act by July. According to council, the amendments would allow for a significant number of people to be entitled to be registered as Mohawks of Kahnawake, despite not meeting the requirements of the current Membership Law.

With a mandate given by the community on Tuesday, facilitators said the proposed law will be drafted by a technical team and will be released in the coming weeks.

“The drafting team will come back, there will be something posted very shortly in terms of the draft, and we will strongly encourage everyone to take a look at it and make their comments known and then when we come back, we’ll have to discuss the law itself,” said Joe Delaronde, who facilitated Tuesday’s consultation session.