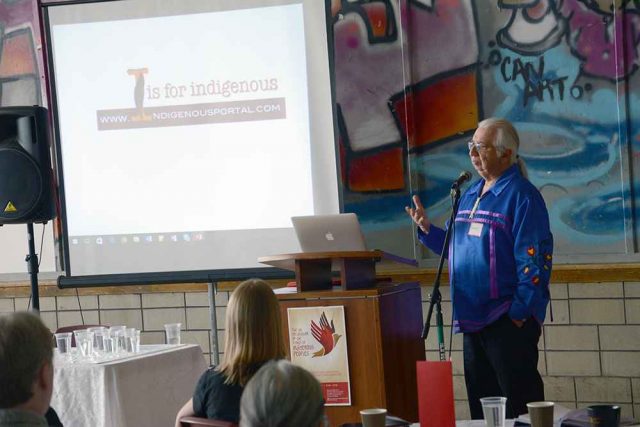 “We have a big job ahead of us,” said Kahnawake United Church pastor Lisa Byer-de Wever after listening to a morning full of discussion on the United Nations Declaration on the Rights of Indigenous Peoples, and how churches can use the document as an opportunity.

“But it’s not an overwhelming one,” Wever added.

“Amen!” an attendee at the event yelled in response.

207 Longhouse secretary Kenneth Deer was the final speaker, Saturday, before lunch at Westmount High School, as religious organizations from across Montreal discussed the UNDRIP, Truth and Reconciliation Commission and other issues in the hopes of forging a new reality between religious groups and Indigenous populations.

The intentions of the conference titled “A challenge for Canadians, an opportunity for churches” were three-fold. First, discussions and workshops were meant “to increase interest in and awareness of settler vs. Indigenous issues,” and also to demystify the complexity of issues surrounding the dichotomy.

Finally, the afternoon focused on brainstorming practical, achievable goals and objectives to repair and renew relationships between faith groups and Indigenous people.

Religious groups, as opposed to political ones, have a different calling for Wever and the others who attended Saturday.

“Political venues have their own agenda,” said Wever. “The objective for the group is to educate ourselves with guidance from Indigenous leaders at each table; to find concrete ways that we as a church, can respond to the truth and reconciliation (commission); and how do we make some of those challenges and issues a reality of conversation in our circles?”

Deer said the response to talks about the UNDRIP is generally more positively received by religious groups than it once was. Groups’ questions and comments tend to circle around one question.

Deer, Kahnawake elder Joe Deom and others were among the Indigenous leaders at each table who took questions from attendees, including education, Indigenous connection to the land and identity.

Christine Jamieson is an associate professor in theological studies at Concordia University and spoke Saturday about the Indigenous way of knowing and the interconnectedness of physical, spiritual, mental and emotional parts of people’s lives.

“So when we talk about spirituality, it’s not a separate aspect of everything else,” said Jamieson, whose father is from the Boothroyd Interior Salish community in British Columbia. “It’s intricately tied-in with every dimension of the human person.”

Jamieson said participants asked her about repairing the damage done by assimilation programs such as residential school. Her response was to draw attention to Indigenous people’s connection to the land, and the need to enhance and repair that connection where possible.

“What I was trying to say was that it’s not really an option. It has to be a way forward,” she said. “It’s like saying, I’m going to take the essence of who you are, take it out and say it’s not that important. It’s so crucial and central to Indigenous identity, that sense of land and grounded-ness.”

She said those present Saturday were open to suggestions.

“In this group, there’s a real openness to understanding and exploring,” said Jamieson.

Wever said her church and others continue to engage with the TRC recommendations, UNDRIP and other opportunities to forge a new future for their congregations.

“This is one of many educational events that are happening in both the united church and other denominations,” said Wever. “Every opportunity to educate ourselves, as I put my settler hat on, and opportunities to begin conversations, move us forward as a larger community.”