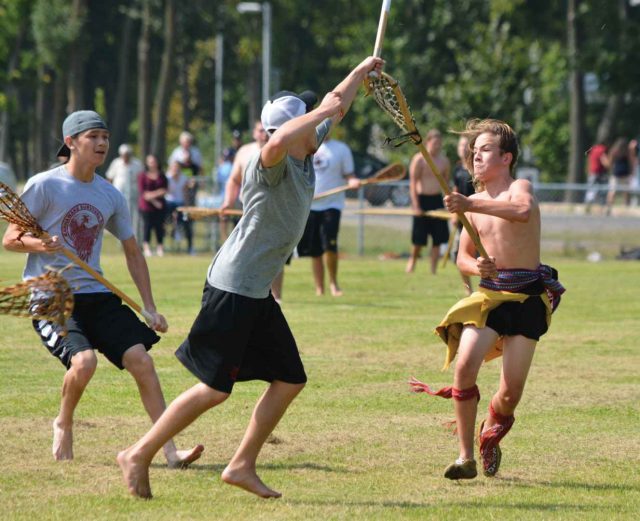 Survival School hosted traditional lacrosse contests to kick off the school year for the past couple of years with laxers applying their trade with the traditional wooden sticks, and shot for a pole rather than a net. (Daniel J. Rowe, The Eastern Door)

The true origins of lacrosse will be on display next month as the Canadian Lacrosse Association (CLA) celebrates its 150th anniversary. The fact that the modern game coincides with Canada’s birthday is no accident. It is believed that lacrosse was brought to the rest of the country by George Beer, who learned to play it in Kahnawake in the 1840s.

Louis Delisle is a student of the game. He also happens to be enshrined in the Ontario Lacrosse Hall of Fame. It’s because of his enshrinement that he is coordinating the re-enactment game June 17 on the lower field at McGill University.

“It will be a pre-European contact game,” Delisle said. “Players will use a deerskin type of ball, and they will wear breech cloths. They will use old-style sticks and to score they will have to hit a goal pole with the ball.”

To make it as authentic as possible, Delisle got Helen Cross and Donna Rice of Kahnawake to fabricate the breech cloths that will be worn by the young players who are mostly from Kahnawake Survival School. They will also play either barefoot or in moccasins.

“They have played medicine games in the past and a few brought their own (breech cloths),” Delisle said. “They really relish it and feel they are going back in time and doing it in front of the creator like hundreds of years ago. They feel a big sense of pride.”

The game will be played eight players per side and is scheduled to get underway at 2 p.m. on the Saturday. The only adjustment for modern times is that the boys will be wearing compression shorts under their breech cloths.

Players will also have their team colours painted on their faces and arms in Kanien’kéha symbols.

Following the tribute to the origins of the game that dates back thousands of years, there will be another re-enactment game. This time it will only be from 150 years ago.

In that game players will wear the uniforms of the day, which included shorts over long johns and small caps.

“I feel proud to be part of the sport of lacrosse and not just as a Native,” Delisle said. “This all-encompassing game was given to us by the Creator so that the whole world should enjoy it.”

The games are being played on the campus of McGill University as it is the closest they can be to the old Peel basin and the Montreal Amateur Athletic Association (MAAA), where that game was held in 1867.

“It’s extremely important that we’re looking at the roots of the game,” Delisle said. “It was a Native pastime and sport and culture to train young men to have endurance, strength and toughness.”

Skye’s roots go back a long way in lacrosse. Her great-great grandfather was Big John Canadian, known as one of the best players to ever carry a lacrosse stick.

“All my life I heard stories of my great-great grandfather Big John. Apparently he was quite famous in his day and now to have outside recognition brings a sense of pride to who we are,” Skye said.

That pride and will be on display as the past and future of lacrosse meet from June 16-18 in Montreal.