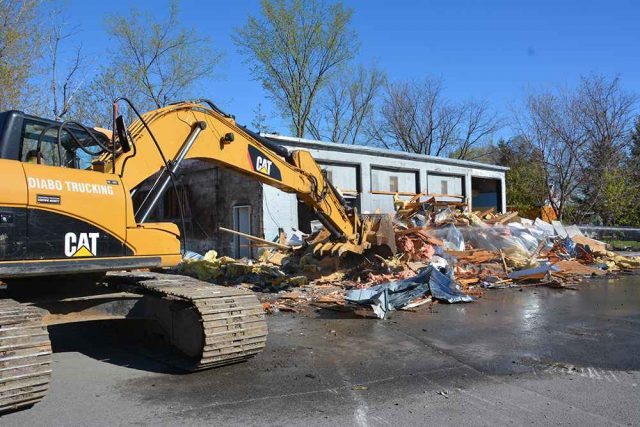 The material from Friday’s demolition of the decommissioned Recycling Depot will be sorted and recycled, while the site will be filled with stone. (Jessica Deer, The Eastern Door)

With a brand new recycling pick up service in full swing by the Mohawk Council of Kahnawake’s waste management department, the decommissioned Recycling Depot was torn down last weekend.

The 2,560 square foot building was originally built in the 1950s as a town garage, and was taken over by the Environment Protection Office in 1987 for a recycling sorting facility.

“The north side of the bay was tearing away from the building,” she said. “The roof was constantly leaking, on one section of the roof, the gyprock had collapsed from the ceiling from the moisture. It was becoming a problem.”

Despite it being time for the building to be demolished, Friday morning’s demolition still evoked mixed emotions for Holly.

During the first year of Kahnawake Survival School in 1979, the building was home to the school’s carpentry and welding classroom.

“It’s a bit of that sadness of memories gone by. I would always think of that building not as the Recycling Depot, but as the carpentry and welding classroom. There’s other buildings in Kahnawake that have been demolished that were classrooms,” said Alex, who taught social studies and eventually become principal.

“Those of us that were teaching the senior students specific subjects, we traveled around from class to class because the classrooms were all over Kahnawake. I would go there, and the two groups of guys would come together and I taught them social studies.”

He said the first year was always an adventure.

“Classrooms were in a basement, it was in an abandoned house, and here it was in this town garage, the basement of the Legion. It was exciting because it was so different,” said Alex.

Onake Paddling Club also used the building as its first home during 1972. The club started that summer after a number of boats, including a war canoe, were donated by the former Grand Trunk Boating Club in Verdun.

“We didn’t have a clubhouse built or anything, we just started. So, we stored the boats at the town garage. They stored them in part of that building,” said Harley Delaronde, who also spent many years teaching at KSS.

“Every evening, a group of paddlers would go to the club and carry the boats out down to the seaway. The war canoe, you’d need six, eight people carrying it. At the seaway, there was no dock. We’d just put it in the water and one at a time climb in from the shore.”

The material from last weekend’s demolition will be sorted and recycled, while the site will be filled with stone. While there’s no more drop-off facility for recycling service in the community, Holly said a new building will be constructed in a different location.

“The location itself was poor because of it being near residences,” she said.

“The quality of material being dropped off there was bad. People were throwing garbage and items that didn’t belong there. It was causing a mess in the area, especially around Christmas. It was totally not acceptable.”