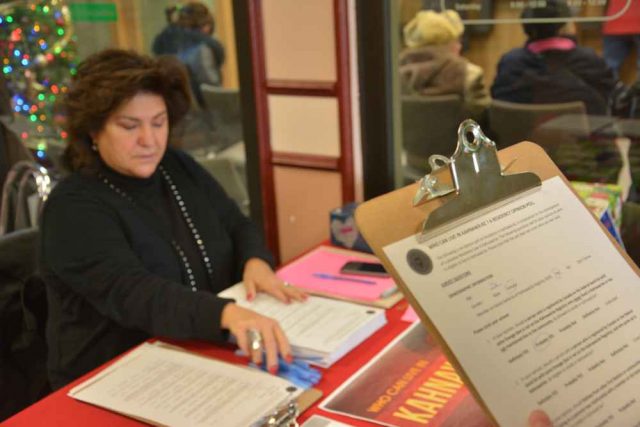 Mohawk Council of Kahnawake chief Rhonda Kirby spent the first few months of the new year gauging community member’s thoughts about who should and shouldn’t live in Kahnawake.(Daniel J. Rowe, The Eastern Door)

According to recent survey results conducted by the Mohawk Council of Kahnawake (MCK), the majority of the community supports the creation of a law to control and enforce who can reside in Kahnawake.

Between December and April, council chief Rhonda Kirby gauged sentiments on the law from 124 members on the Kahnawake Kanien’kehá:ka Registry (KKR). Eighty-seven percent of those consulted felt a need for a separate residency law.

“Originally, there were requests that came forward from Suzy Goodleaf, Karrie Lacroix and Rhonda Kirby for the development of a residency law, they went to the KLCC (Kahnawake Legislative Coordinating Commission). The requests were put forward but they weren’t addressed immediately,” said Winona Polson-Lahache, chief political advisor at the MCK.

Provisions dealing with residency were previously included in the membership law, which is currently undergoing amendments through the Community Decision-Making Process.

“The mixing of residency issues and membership issues was starting to make things really confusing, so there was some thought put into whether or not it makes sense to actually separate residency from membership issues,” said Polson-Lahache.

The idea put forward is that the membership ought to deal with members on the KKR, while a residency law ought to pertain to other people who may or may not be eligible to reside in the community.

Polson-Lahache said results from the 23-question survey would help shape the law.

“There were questions about who should be able to reside in Kahnawake. If there’s going to be a law that is developed, and you’re going to allow people who are not on the KKR to reside, what criteria should they meet?” said Polson-Lahache.

The majority supported the idea that Indigenous people from other First Nations communities who are married or living in a common-law relationship with a member, working in the community, or attending an educational facility in or near the territory, ought to reside in Kahnawake.

“The first question was, non-Natives that are in a relationship with a member on the KKR, but they got married after the 1981 moratorium. There was a very strong indication from the community – 79 percent of the respondents – that they shouldn’t be allowed to reside here,” said Polson-Lahache.

“If they were raised in the community before the 1981 moratorium was another question, and 60 percent of the respondents said that they shouldn’t be able to reside here.”

The third question dealt with non-Natives adopted by members after the 2003 amendments to the Membership Law.

“The 2003 amendments to the Membership Law that changed the criteria to having four of eight great-grandparents in order to be eligible to be on the KKR – sixty percent said no,” said Polson-Lahache.

Council announced  that a more in-depth information session will take place tonight at 7 p.m. at the Knights of Columbus hall on the issue, while the first Community Decision-Making Process consultation session is scheduled for May 23.

“At that session, the community will be asked to confirm whether or not there should be an urgent law that goes forward, to collect a mandate, and to approve the purpose and scope of what the law should look like,” said Polson-Lahache.