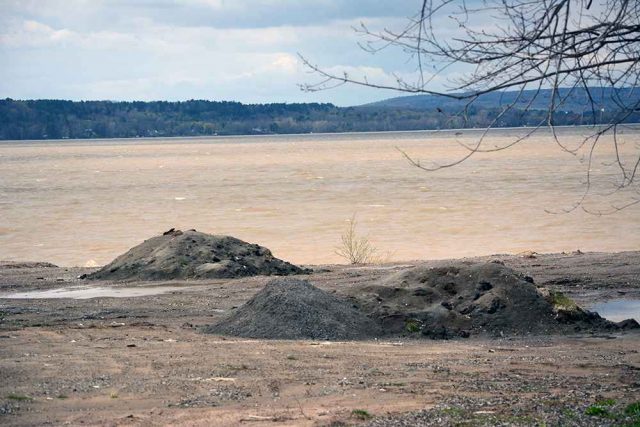 Kanesatake’s Mohawk Council is threatening a moratorium on all landfill coming into the community, as unregulated dumping, some of it contaminated, is causing concern for residents. (Daniel J. Rowe, The Eastern Door)

A concerned Kanesatake resident has been watching trucks coming into the community and leaving behind unpleasant material for the past months, and decided to do something about it.

“They started dumping down my road, and then I found out that it was the same earth that was down by my brother’s road,” the resident said, who wished to have their name withheld.

The resident checked with the owner of the property where the material was dumped, who said it was not contaminated, and okay to use as landfill.

“I passed by and saw the dirt,” they said. “It was like grey clay. It just looked horrible. After they spread it, you could see garbage and construction debris in it.”

They called council and said that the MCK had inspected the material and approved it being dumped on the lot.

This resident was not the only one who noticed a growing number of trucks, many coming from the Turcot Yards, dumping material throughout Kanesatake. The outcry prompted the MCK to send a letter to all Kanehsata’kehró:non April 28 asking community members not to accept contaminated landfill, threatening a moratorium on all dumping if the situation doesn’t change.

The letter mentions the Turcot trucks, and adds that council has tried to regulate or stop the activity “only to be met with opposition from members that are bringing in this unregulated fill,” it reads.

The letter explains that council has secured almost $650,000 to install an environment office, test soils on eight sites this summer, and install a system community members will need to apply to if they want fill.

Mohawk Council of Kanesatake grand chief Serge “Otsi” Simon spoke to The Eastern Door from home Tuesday while recovering from a medical emergency last Friday when he collapsed in the office, requiring transport to hospital.

Simon said there were 32 identified sites that contain potentially contaminated soil, and added that negotiations are underway with the federal government to secure funding for a police force to help monitor the community.

At the MCK elections June 10, a separate ballot will ask community members if they want council to create a landfill and dumping law.

Simon, who said he is feeling better and working on regaining his strength, is frustrated by the amount of truck traffic crisscrossing his community, and the members he suspects are being paid to allow landfill.

“I see hundreds of trucks,” said Simon. “I sit in my office and I see them going by, and not just little dump trucks. We’re talking 18-wheelers and huge trucks.”

Dumping in Kanesatake is nothing knew according to the resident who spoke with The Eastern Door.

“There’s been dumping throughout this community for the last few years. It’s not a new story,” the resident said. “I think at one point they stopped it a couple of years ago and then it started up again, and they’re coming in by the truckloads and there’s no environment office to check the validity of these papers to see if they’re not contaminated.”

Council now has an environment office, whose head Eugene Nicholas said he was not authorized to comment on this story.

The resident received abuse primarily by Facebook when they brought the issue up, but decided to speak up because of a simple reason.

“This is my area,” they said. “I’m concerned with what’s going into the earth and coming into our water tables. We all live on well water.”

Simon is committed to stopping unregulated dumping, but that it’s not as easy as banning all landfill.

“We’re working on doing something because we’re stuck between community member’s right to improve their land, and safeguarding the environment,” said Simon. “People get really mad when we stop the trucks. They come into the band office and they scream at the top of their lungs at us, so that tells me, why would you be screaming about dirt? There must be something else behind it. It’s always money.”