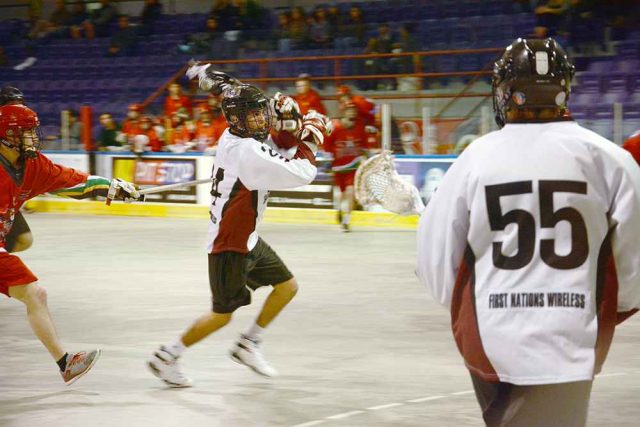 Hunter forward Cam Horn was predictably productive on the score sheet Sunday, but also saw his name on the penalty minute portion of the stat sheet too many times for his liking. (Daniel J. Rowe, The Eastern Door)

Even strength, it wasn’t even close.

The Kahnawake Junior B Hunters dominated the Gloucester Griffins Sunday afternoon when each team had five runners on the floor in Kahnawake’s OJBLL (Ontario Junior B Lacrosse League) home opener.

Unfortunately for Kahnawake, its home opener went down as an 11-10 overtime loss with the Griffins’ almost 10 power play or extra attacker goals, including the game-tying goal by Justin Tkachuk in overtime.

One player who found himself in the box more than he would like was attacker Cam Horn, who had two goals and three assists, but six minutes in the box.

“Seemed like a normal check would end up being a penalty, but the refs aren’t an excuse for the loss,” said Horn. “It’s always been us against the refs and we have to get used to it.”
Cree was likewise unapologetic, and knows that officials are also just starting their season, and should be given some leeway.

“It’s the beginning of the year,” he said. “The refs try to make their statements and make sure the kids aren’t too out of control, make sure the game stays clean. It’s not unexpected. The refs need to get into the groove. They haven’t reffed since last year, probably.”

The Hunters came out fast and effective, scoring three in the first three minutes with Alan Singleton opening the scoring, and Stone Jacobs getting two.

Gloucester, however, countered the Hunters’ high-paced, aggressive opening by slowing the pace down, and was able to nab three to knot the game by the first intermission at threes.

“We were aggressive. We like to run, we like to pressure, we’re in shape, all of that,” said Cree. “They walked it down the floor. We wanted to run, they wanted to play slow ball.”

In the second period, Gloucester made use of the Hunters’ inability to stay out of the box, and entered the third up 7-5.

“They did a good job of putting the ball in on the power play,” said Cree. “We need to clean up on our penalties, hitting from behind, high sticking.”

The Jacobs-Singleton-Horn trio kept coming mounting attack after attack, and when Jake Rice scored off Zack Powell and Raianeráhstha “Rasta” Diome, the game looked to go in the books as a win.

Cam McLean proved spoilsport with two-and-a-half minutes left though, and the game headed for overtime.
Singleton scored 28 seconds in to give the Hunters the lead, but Tkachuk’s goal after a Kawis Stacey high-sticking penalty, tied it before Nick Brayton scored the game winner.

The Hunters get a shot at revenge tonight at 7 p.m. in Kahnawake when the Griffins come to town for game two. Tomorrow the Hunters runners get their first look at the Orillia Kings at 2 p.m. at the Sports Complex.
Cree likes what he sees as a developing project in his first season behind the bench.

“I’m happy, I got no problems,” said Cree. “We just need to work on it. Obviously it’s game one and we’ll get better.”