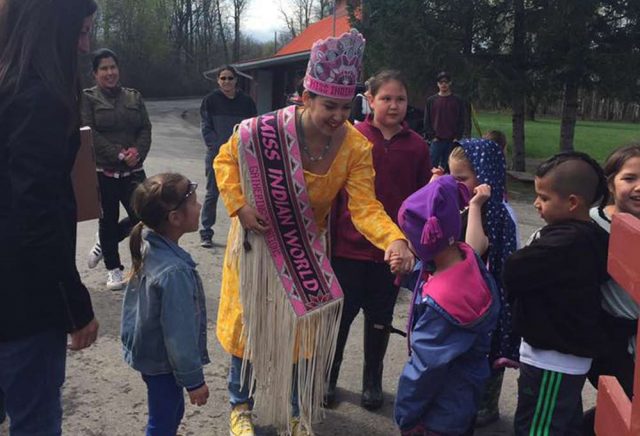 After four days of competing at a prestigious cultural pageant for young Indigenous women, Kahnawa’kehró:non Raven Swamp was crowned the 2017 Miss Indian World.

“Truthfully, I didn’t expect to win. I only intended to try my best and see how far it got me. My family and friends believed in me before I even did!” said Swamp. “I was truly shocked when they called my name. To tell you the truth I still have trouble believing it actually happened.”

Miss Indian World has been a staple at Gathering of Nations, the biggest powwow in the world, since the 1980s.

Swamp was among 24 Indigenous women representing their families, communities, and Nations at the pageant, which took place April 25-29 in Albuquerque, New Mexico.

“It was amazing. I met an incredible group of women who I can call my friends. In the beginning I was shy in their company and intimidated but as the week went on I felt my confidence grow. It was a lot of work with rehearsals and location changes, but all-in-all I had the time of my life,” said Swamp.

Each contestant competed in the areas of traditional talent, dance, public speaking, a personal interview and essay writing.

“I was nervous during most of the competition. Jokingly, I said to a friend “I don’t even recognize myself when I’m up there!” Something takes over as I speak during certain engagements. I feel like I have conquered a bit of my fear of public speaking,” she said.

“Language is the foundation of who we are as Onkwehón:we. It connects us to our ancestors and to our culture. Speaking our language is how we preserve our culture and learn about who we really are,” said Swamp.

“Indigenous food sovereignty is taking control of what we put into our bodies. It’s important to eat our traditional foods for the betterment and well-being of our people.”

The 23-year-old currently teaches Kanien’kéha at Karihwanoron Mohawk Immersion. She is also heavily involved in a grassroots initiative that aims to establish an organic, self-sufficient farming project that strives toward our community’s economic independence through food sovereignty. For the past two years, Swamp, along with about a dozen other community members have been cultivating white corn and other vegetables on land north of Highway 30.

While most of the contestants for Miss Indian World hail from across the United States, Swamp was among three vying for the title from First Nations communities in Quebec, in addition to Kayleigh Spencer from Mistissini and Melissa Gilpin from Waskaganish.

“I learnt a lot about myself. One, that I can perform under pressure. Two, that I really underestimated what I am capable of, and three, that I knew I belonged up there with women who, in the beginning, I was intimated by and in awe of,” said Swamp.

Swamp was crowned on April 29 in front of a packed audience at the Gathering of Nations powwow arena.

As a prestigious cultural ambassador for Indigenous people throughout the world, the newly crowned Miss Indian World will spend her year travelling, when the opportunities arise and promoting cultural awareness, diversity and Gathering of Nations.

“I’ve been overwhelmed by the outpouring of support from Kahnawake,” she said. “I will be travelling across Canada, the USA and internationally as soon as I receive my itinerary. I will be traveling to many different places. I am looking forward to representing the people as best as I can! I hope to continue to make my community proud; their support will carry me along during this coming year.”