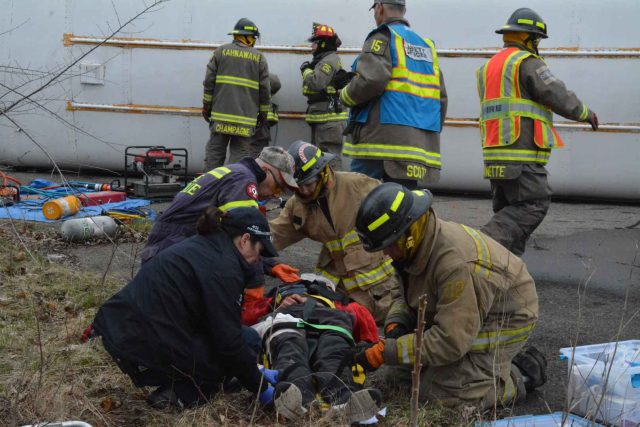 Over two dozen members of the Kahnawake Fire Brigade participated in a mass casualty training exercise on Saturday morning at the old Kahnawake Survival School campus. Lorne Richardson at Plaza Diesel donated the bus used for Saturday’s training. In the past, it also belonged to the Mohawk Council of Kahnawake and was used as a pilot project for public transportation in the community. (Jessica Deer, The Eastern Door)

Around 30 paramedics and firefighters from the Kahnawake Fire Brigade (KFB) put their knowledge and skills to the test by responding to a mass casualty training exercise early last Saturday morning.

The scenario involved a bus flipped on its side at the old Kahnawake Survival School campus, with over a dozen volunteers who simulated various injuries associated with the accident.

“We did this because we wanted to test our capabilities in a mass casualty incident involving our paramedics, and our fire and extrication crews,” said Amanda-Lee Phillips, quality assurance and medical instructor at the KFB.

“He did a lot of the running around for the bus, to get the bus here, to find a bus, to get the towing. For myself, I planned all the patient scenarios and traumatic injuries. I tried to get a wide variety of injuries because anything is technically possible with a bus that is rolled over, so we had things from small cuts, bumps and bruises to a patient who unfortunately died,” said Phillips.

This reporter volunteered to be a patient suffering from hip and lower back pain, while others had broken limbs and eviscerations. Around a dozen students from John Abbott College’s Pre-Hospital Emergency Care program, volunteered to be patients for the exercise.

“We work pretty closely with the paramedic program at John Abbott. The coordinator mentioned to us last year that they have to do so many volunteer hours and that this could count for that,” said Stacey, a captain at the KFB.

Chelsea O’Brien, a first-year student in the program, was the last patient removed from the bus on Saturday morning.

“I think it is important to volunteer and learn what happens on a real scene, what people are doing and the actual things that go on, because I will be a paramedic. It’s a great experience. You get to know what happens and are aware of the things you possibly have to do one day,” said O’Brien.

“It was interesting. They were deciding how they would take me out whether to do the KED (Kendrick Extrication Device) or the backboard, but then I was in at an awkward angle, so they had to cut the seat, then they put me on the backboard.”

For the KFB, the exercise highlighted its strengths, identified some of the weaknesses, and gave them a better idea of the type of training they’ll need in the future.

“Overall, it was pretty good. There were some eye-openers. Just certain individuals, you could see they either really stepped up their game – they impressed me. And, there’s others that you realize maybe they’re not properly prepared for this,” said Stacey.

“If you do a simulation like this, if you have some kind of exercise, the adrenaline isn’t there. A lot of people in this career are adrenaline junkies, when the pager goes off and you know it is a true emergency, people’s mentalities tend to change. When it’s an exercise, they knew it was an exercise, so I wouldn’t say you’re not as into it, but you’re not completely who you would be on an actual emergency.”

Nonetheless, Stacey said the exercise demonstrated the need for members to have more training when it comes to bus extrication.

“The whole purpose of these exercises is for that very reason – to see where we lack and where we don’t, so now we can concentrate on training. Definitely some form of theory or practical on bus extrication as a whole, or even farther with heavy vehicles, tractor trailers, dump truck and garbage trucks,” said Stacey.

The larger vehicles can be a lot more difficult to cut through than a standard car.

“It’s different than cutting through a car, and that was the whole point. We told them to cut through it because we wanted them to practice on it because there are not many vehicles that have an outer layer, insulation, and then you have to get through another layer. There’s a lot of reinforcement all around the bus,” said Phillips.

“It’s something a lot of people have never done before, that’s why we wanted to practice because it will take some time to get used to how to cut the seats out and different techniques.”

This was the second large-scale training exercise both Stacey and Phillips have organized in the past year for members of the KFB. In June, they held a simulation outside of the Sports Complex with people who were contaminated by ammonia.

“It’s to give us exposure to rare scenarios, but stuff that is realistic. They’re rare to occur, but they are very possible in our own community,” said Phillips. “We’re going to try to do some large-scale training annually.”