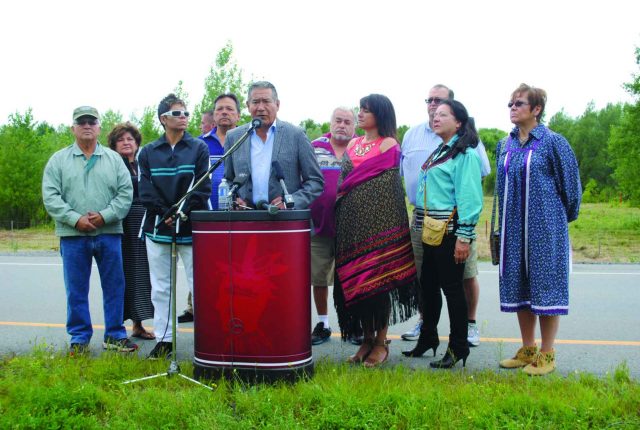 The elected leaders of the Mohawk Council of Kahnawake stood alongside Highway 30 in 2015 to announce a boycott of business in Chateauguay and their collective intention to go ahead with any economic development on returned land despite a lawsuit headed by the neighbouring municipality’s mayor, Nathalie Simon. The lawsuit begins today. (Sarah Dimmock, The Eastern Door)

The front page story of The Eastern Door’s June 28, 2013 edition (vol. 22 no. 25) read “Mayors target Mohawk land.” The story, which was covered extensively over the following years revolved around the St. Constant, Ste. Catherine, St. Isidore and Chateauguay mayors (and the MRC de Roussillon) lawsuit launched against the Quebec government over lands slated for return to Kahnawake, running along the north side of Highway 30.

Fast forward to today and the case is set to be heard, in a Montreal courtroom. Chateauguay mayor Nathalie Simon told The Eastern Door at the time the suit was launched, “We were not listened to” in relation to the land return and that “the only way we found to be listened to by Quebec is the legal way.”

The lawsuit delayed the former transfer of lands negotiated under former Mohawk Council of Kahnawake grand chief Mike Delisle, and resulted in current council grand chief Joe Norton issuing a boycott of Chateauguay businesses in addition to a war of words with the Chateauguay mayor.

“I’m doing this with pleasure. It’s for Kahnawake’s benefit,” Delisle told The Eastern Door. “A lot of my work that went into it, I want to see to fruition.”

Delisle negotiated 700 acres to be returned (500 adjacent to Highway 30 and 200 to be determined), to make up for the footprint of the highway that runs straight through lands in the Sault St. Louis Seigneury. Quebec has repeatedly said it has no intention of halting the land return, and thus the court case proceeded.

“The province negotiated in good faith and did its job and signed a decree passing it over to Canada for Additions To Reserve (ATR),” “The justice department there (Canada) said ‘whoa, whoa, whoa. We’ve got a lawsuit going. We shouldn’t proceed until the court case goes to fruition or there’s a settlement.’ Now, it’s going to court,” said Delisle.

Delisle and Norton have both criticized the mayors for being unwilling to sit down and have the situation explained to them rather than going to court.

Simon said at the time the mayors felt it was unfair that Kahnawake would be able to develop reserve land along the highway in whatever way the community deemed, while the lands along the 30 in Chateauguay and elsewhere remain zoned green for agricultural purpose.

The suit has caused delays in planned projects along Route 30, which council hoped would trigger the community’s, and, Delisle argues, the region’s economy.

“Honestly, why do we have to wait?” said Delisle. “This was done between the government of Quebec and the government of Kahnawake for the benefit of Kahnawake,  not anyone else. And for them to be so shortsighted, to say whatever economy we would build along that highway would not help service surrounding municipalities, is beyond shortsighted and selfish, so why should we have to wait?”

As for lack of consultation, both council grand chiefs have had a word or eye roll about that.

“They don’t consult us when they build a sewage treatment plant on the edge of the community where the people of Kahnawake live, and I’m not saying tit for tat. I’m not an eye for an eye type of guy, and two wrongs don’t make a right, but this is about history, and this is about something benefitting Kahnawake, and, to me, extraneously benefitting all the surrounding communities as well for economic development purposes,” said Delisle. “It’s about history and land.”