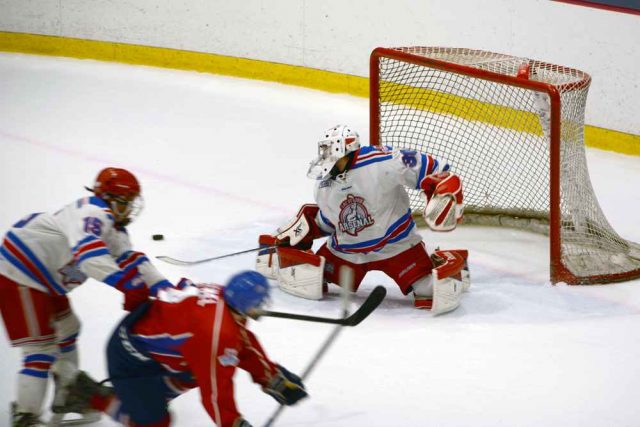 Thomas Dailleboust’s Midget Espoir Arsenal could not muster enough offence to get the team into the medal rounds of the Dodge Cup, but the Kahnawake puck stopper remains sought after for his skill between the pipes. (Daniel J. Rowe, The Eastern Door)

Though no players from the community on the boys side returned with medals from the Dodge Cup, a half-dozen young stars put in solid performances and will be ones to watch in the coming years.

Ontario Hockey Academy’s Rick Lalonde was in the stands Friday night checking out Kahnawake net minder Thomas Dailleboust, as he stood between the pipes of the Midget Espoir Lac St. Louis Arsenal’s final game against the Abitibi-Temis Citadelles.

“He’s certainly on a short list of goalies we’re looking at,” said Lalonde.

Dailleboust was stellar once again for the Arsenal, who was bounced from the cup after losing 4-1 in the team’s final group game though in no way due to the talented goalie’s performance.

Dailleboust gave up two goals in the game (two were empty netters), and was solid all game. One of two goals came on an Citadelle power play and the other was the result of some lax defensive play with Dailleboust bouncing back from each goal.

The Arsenal had more than a few chances to even the score, but failed to capitalize on multiple power play chances.

As for Dailleboust, the scout liked what he saw, as the score could have been much more lopsided than it was.

“He plays well in the net, he doesn’t give up too many rebounds, his rebound control is pretty good, and he keeps pucks away from trouble,” said Lalonde.

“He does a lot of good things.”

The Arsenal’s Trey Deere showed his MVP-caliber skill straight out of the gates last Thursday scoring two and assisting on the other in the Arsenal’s game one loss to the Quebec Corsaires.

Defenceman Jayce Delaronde got on the score sheet in the second game against the Laval Patriotes when the local boy scored the team’s first goal on an assist from Deere.

Unfortunately for the Arsenal, the team could not get past a tough Lourentien Conquerants team Saturday, and lost 2-1 to end Lac St. Louis’ cup run.

The Releve team was 1-1 heading into Saturday’s contest against the Saginuay Lac St. Jean Espoires with Jesse Lahache Jr. getting the call to start as goalie.

Lahache Jr. gave up two goals in the first period, and shut up shop holding off the Espoires shooters for the rest of the game. The Arsenal Releve went on to win 3-2.

Lahache then had to face a stacked Abitibi-Temis Forestiers team Saturday night that peppered the young goalie for a period and a half scoring four unanswered.

Lahache Jr. was pulled in the second, but the song remained the same with the Forestiers easily the stronger of the two teams.

The Arsenal Releve rarely found its way into the Forestiers zone, and though the team managed to get two goals back, the Forestiers piled on the pain and won 8-2.

It was a tale of what could have been for the Lac St. Louis Cougars Midget BB squad that flew out of the gates with a 5-2 win Thursday against the Richelieu Siegneurs.

The Cougars feature local Stone Jacobs as well, and struggled against the Richelieu Mousquetaires the next day losing 5-0.

The Cougars bounced back in a big way beating the Laurentiens National 8-3 Saturday morning.

The news was not all good though for the Cougars after a National player shot a puck intentionally at Mehlhorn that hit him in the ear forcing him to the hospital. The open wound required nine stitches, and sidelined Mehlhorn for the remainder of the tournament.

The Cougars lost a nail biter 2-1 later that day against the Quebec Harfangs to end Lac St. Louis’ cup run.

Mehlhorn said he was feeling better Monday when The Eastern Door contacted him and had no complaints about the year.

“We had an amazing season and it was an honour just to make it that far,” he said. “(I’m) glad to spend it with a great group of guys.”