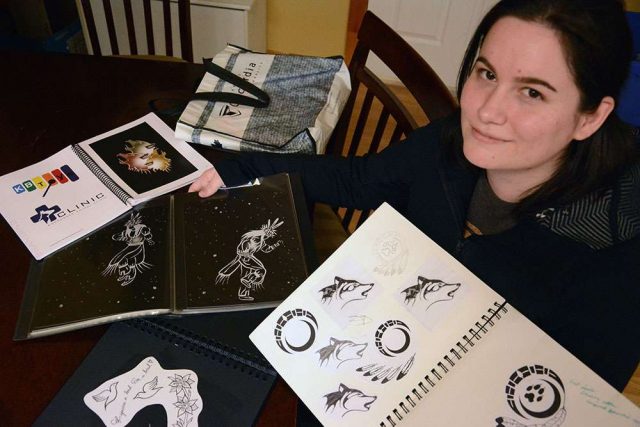 Skarahkotà:ne Deom’s educational path was a tough one that involved swallowing the tough pill of perseverance that saw her overcome a subject that sends shivers down the spines of many in Kahnawake: French. (Daniel J. Rowe The Eastern Door)

The journey has not been short, easy or without a swerve in its trajectory, but for Skarahkotà:ne Deom, 24, it has been worth it.

Deom will begin her final year of an art education degree at Concordia University in the fall, which will be the final hurdle for the young woman, who pushed herself to finish CEGEP and university, not without difficulty.

“I was brought up not to give up, to keep pushing on,” she said. “There was no way that my father (Thomas Deom) was going to let me give up. That’s not how he raised us.”

Skarahkotà:ne graduated from Kahnawake Survival School with a group of her friends, who all entered CEGEP eager to take on the post-high school world. Many, however, did not remain with her at Dawson College, as the workload and pressure caused the numbers to dwindle.

“I’ve watched every one of my friends slowly drop out one-by-one like flies. I can’t think of anybody else who actually finished their program,” said Skarahkotà:ne.

The biggest obstacle to overcome in CEGEP was French, the death nail subject for many from the community. It’s a subject students are required to pass to graduate, and Deom watched as one after another of her friends from Kahnawake dropped out, while she tried and tried again.

“It was rough,” said Deom. “I must have failed French about five times in my career at Dawson College, and I kept pushing myself to get past it.”

As hard as French and her other courses were, Deom knew she was not going to quit.

It’s something her parents Thomas and Margie Deom saw firsthand. “We encouraged her to just keep at it,” said Margie. “We offered her a lot of suggestions to help herself with her schooling to ensure that she’d see it through. We wanted her to not give up on that.”

Learning French is something students must embrace to learn, and Skarahkotà:ne’s parents know this.

“We encouraged her to be open-minded about applying herself towards French, and she stuck with it,” said Margie.

“I was glad that she did it. We realized that our education system in Kahnawake, as far as French, is not up to par for all the kids across the board. There may be a very small percentage the pick up on the language, but they have to have that respect for wanting to learn it, and that’s what we try to apply in all our kids. We encourage them to be respectful and open-minded about learning the language.”

Skarahkotà:ne took as many as 10 courses a semester in CEGEP, studied over summer, and knows full well the pressure to hang it up and drop out like many of her friends.

“I sympathize because it was really hard for them, and a number of times I felt like I wanted to drop out,” she said. “I was feeling depressed. It was so stressful with the amount of courses I was taking.”

Skarahkotà:ne finished at Dawson, entered Concordia, and is now one year from finishing her bachelor’s degree.

She spoke about the effect school has had on her confidence and self-esteem.

“When I first started out at CEGEP, I didn’t want to talk to anybody,” she said. “It was the culture shock, really, and getting out of the comfort of knowing everybody, or everybody holding your hand. Once I got out there, I felt like I didn’t have anybody to talk to and nobody understood me or I didn’t understand them with the cultural differences.

“But it also pushed me to want to get to know everybody. By the time I graduated form Dawson College and moved on to Concordia, I was very talkative and I learned to become social with others to the point where we’re becoming best friends, and helping each other out.”

Her father Thomas watched his daughter grow into a solid work ethic over her years at school across the bridge.

“I noticed how she had changed,” he said. “She had matured as a person and a student and her attitude towards her work had changed, her ability to employ time management and everything was night and day to when she first started CEGEP to when she started university.

“Now that she’s in university, she’s just attacking her studies with a vengeance…. It’s impressive and satisfying to see that.”

Skarahkotà:ne hopes to work at her alma mater Survival School as an art teacher, and this week saw her work hung alongside two fellow local artists on the Mercier Bridge.

Skarahkotà:ne also had a shift in her personal life after her longtime boyfriend Otiohkwanó:ron Montour pulled a white sapphire diamond ring (complete with skulls) out of his pocket in February and proposed.

“I go to hug him, and he was like, ‘well I was kind of hoping to do this on a mountain,’ and he pulls it from right behind,” she said. “I had my arms around him, and I looked and said, ‘okay? Is that what I think it is?’”

She ended with some advice to Survival or other high school students graduating and entering CEGEP that may have tough courses or roads ahead.

“I would tell them to push really hard and try not to give up,” she said.

“I find the issue is not just the course load because some people can handle that, but it’s the language, getting past the French. I want to tell my sister (Iaonhátie) not to do the same thing (drop out), to push herself, and learn as much as she can to help her pass, and if she ever needed help, I’m there for her.”