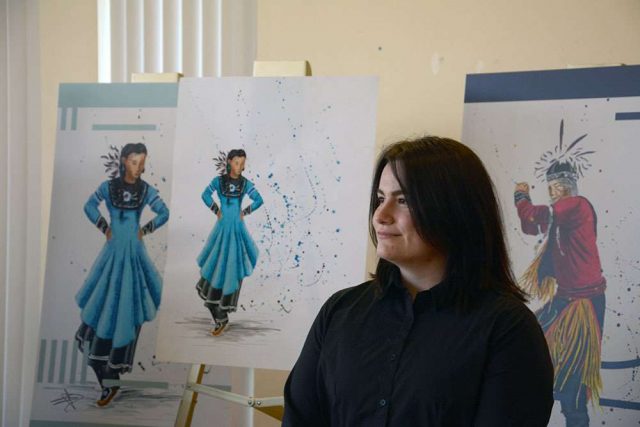 Skarahkotà:ne Deom will have three pieces of her work lining the Mercier Bridge as the 24-year-old Concordia student prepares for her final year for her bachelor’s degree. (Daniel J. Rowe, The Eastern Door)

Liberal Member of Parliament (MP) from Chateauguay Brenda Shanahan painted the scene with words of what commuters traversing the Mercier Bridge will soon see out their vehicles’ windows.

“I can imagine myself sitting on the bridge, maybe there’s a bit of traffic, but I’m in my Zen moment, and I look up and see Kateri or I see the dancer or I see the greenery, and that just relaxes me,” said Shanahan. “That is what I’m looking forward to. I think it’s so beautiful.”

Shanahan described the scene after witnessing the unveiling of five paintings by three local women Tuesday at the Peacekeeper station that will line both sides of the bridge in the coming weeks.

Kahnawa’kehró:non artists Marian Snow, Skarahkotà:ne Deom, and Tyra Ann Kaiente:ri McGregor answered the call for art submissions from a joint initiative from the Mohawk Council of Kahnawake and the Jacque Cartier and Champlain Bridges Incorporated (JCCBI), as part of Canada’s 150th anniversary celebrations.

McGregor traveled to Rome in 2012 for the canonization of St. Kateri Tekakwitha, who features in her piece.

“She’s a strong female that Onkwehón:we can be proud of, that we have someone like her from our community,” said McGregor, 16, the youngest of the three women.

Snow encouraged Deom to submit and was excited to see her work chosen. Snow spoke about the difficulty in working as an artist in Kahnawake, and hopes the added attention the pieces will draw helps those in the community applying their creative skill.

“It’s hard to survive being an artist in Kahnawake because people still don’t realize that some of us legitimately try to make ends meet on our art careers, so they don’t think to hire us for doing anything more than small scale decorative stuff,” said Snow. “Hopefully, after seeing some successful large-scale public art in their public projects, the artistic community in Kahnawake will survive without having to go outside for work all the time. That’s my hope for the arts in this town. It’s a vibrant and growing culture; let’s grow it to it’s max potential.”

The five pieces will be installed on the bridge within the next three weeks, and should last 18 months before fading, according to JCCBI CEO Glen Patrick Carlin.

MP Mark Miller  (Ville Marie-Le Sud Ouest-Ile des Soeurs) was in Kahnawake for the unveiling and introduced himself in Kanien’kéha before speaking about the relationship between his government and Kahnawake.

“They’re all eye-opening, and this is amazing,” Miller told The Eastern Door. “I’m not an artist by any stretch of the imagination, my kid is an artist, but I can’t do a good stick man, but this is amazing, and it’s nice to see the eyes on the artist light up to have the work acknowledged. To have this on the Mercier Bridge is important given its relationship with the community.”

Miller was excited that the work reflected Kahnawake’s unique culture, and merges with the contemporary skill of ironwork on the bridge itself.

“The history of the ironworkers is legendary,” said Miller. “Whether we’re talking about the World Trade Center or all the work that’s been done around the country by this community, so that’s neat, and then having some of the historical recognition like the three sisters is amazing.”

Mohawk Council of Kahnawake chief Christine Zachary-Deom spoke about the bridge and art project, representing a long-lasting alliance between Kahnawake and the federal government.

Carlin explained that there will be special brackets installed on the lampstands supporting the six-foot banners that will alternate between the five works.

Transforming the modern bridge of iron, concrete and other hard materials was an exciting prospect for Carlin.

“The Mercier Bridge is so symbolic to the people of Kahnawake, and I think it’s just a very good way of being able to combine the colour and the culture of the people. They have such a tradition of working on bridges and ironworking, so here you have a combination of everything. It’s almost like the pièce de résistance, but you can put the culture on top of the structure – the icing on the cake.”

JCCBI will light up the Jacques Cartier Bridge downriver from the Mercier, and Carlin sees the two projects of being colourful bookends of celebration.

Snow hopes the pieces lining the bridge will help commuters learn more of Kahnawake’s culture while they fight traffic to hit the city or return home.

“It’s (art) a powerful voice because it speaks to all of us Native and non-Native alike on a common platform,” she said. “Communication on this level is a constant where language and diplomacy can sometimes fail.”