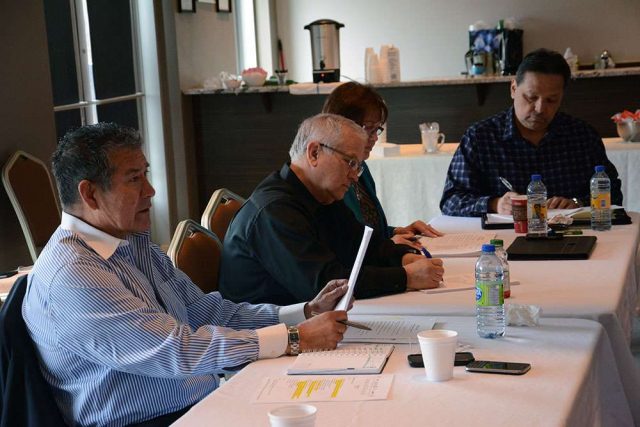 The Iroquois Caucus met in Kahnawake on Wednesday and Thursday to discuss a long list of issues affecting each community. (Daniel J. Rowe The Eastern Door)

“It’s a strong show of concern from the Mohawk Nation, from the Iroquois Caucus communities. People in general should be concerned,” said Mohawk Council of Kahnawake chief Clinton Phillips, who holds the environment portfolio. “We’re hearing from people from the United States, from Canada – there’s not too many people that are in support of this whole notion because of the amount of sheer danger. The possibility of an accident happening is large and people need to be concerned.”

Both the Iroquois Caucus and the Anishinabek Nation claim the plan to transport approximately 23,000 litres of nuclear waste to a medical research laboratory in Chalk River that would be heading to a reprocessing facility in South Carolina was done without their consultation.

“We have unified and strongly opposed this proposal as these shipments would of necessity enter the US along road and bridges on or adjacent to some of our traditional territories,” the letter reads.

Addressed to prime minister Justin Trudeau, the letter is signed by Patrick Wedaseh Madahbee, Grand Council chief of the Anishinabek Nation, as well is MCK grand chief Joe Norton, on behalf of the Iroquois Caucus.

“In this case there’s alternative measures that can be done. The largest part about this is that they’re trying to send it from Chalk River, Ontario in liquid form and they do have the capacity to solidify it there, which would make it a heck of a lot safer to transport,” said Phillips.

The shipments, an estimated 100 to 150 truckloads over the next four years, are supposed to begin this spring.

“Decisions need to be made if this type of development is going to happen and they’re exploring nuclear activity, there needs to be something that is built on site to be able to handle it,” said Phillips.

“What you’re seeing today is the work of a handful of people being concerned. After two five-hour meetings, this is where we are today. There is a lot more coming, but we have to move fast.”

Similar letters will be addressed to environment minister Catherine McKenna, as well as a declaration at the working group’s next meeting in May with the support of regional council chiefs of Ontario and Quebec.

“Our ultimate hope is that Perry Bellegarde on behalf of the AFN (Assembly of First Nation) will sign on this as a declaration that all the First Nations in Canada are banning nuclear or radioactive waste transport through their territories. If we’re able to do this across the country, it’s going to be an enormous statement that Ottawa cannot turn a blind eye to,” said Phillips.

In addition to signing Thursday’s document, the two-day caucus had a long agenda that included discussions on border crossing, membership, as well as hunting and fishing rights.

“We talked a little bit about having a Mohawk Nation card. I know before there was the traditional bodies working on the Haudenosaunee passport, but it’s for ID,” said Sky-Deer.

“We’ve talked about the certificate of Indian status cards and that there’s so many people who have these cards now. Are they truly a reflection of our nation and our right to determine who our people are?”

On Thursday morning, the caucus also heard from Fred Caron, special representative to the minister on border crossing.

“We pretty much spent almost the entire morning talking about issues that border-crossing communities face, or who are in close proximity to the border. He’s supposed to do a special report and try to address our issues,” said Sky-Deer.

Some of the agenda items were deferred to the next meeting, however for the second Iroquois Caucus meeting in a row, elected members discussed inherent rights to hunt and fish. A group of family members from Akwesasne were arrested on the Red Bank community in New Brunswick had their meat, guns and vehicles seized last November.

“They’re due in court this July. We’re building a strategy here to support them. The Iroquois Caucus is going to support them and do whatever we can,” said Norton.