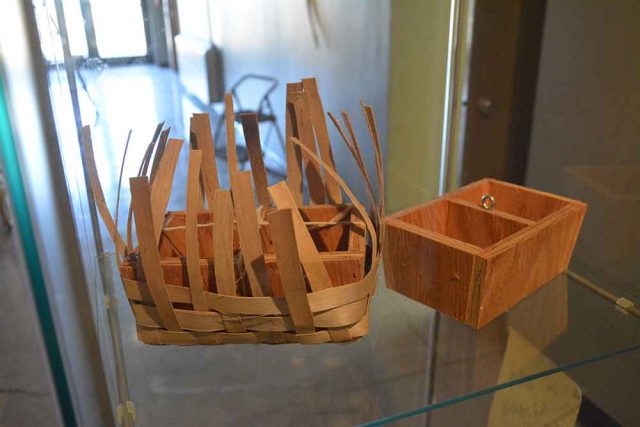 A variety of woodwork created by past participants of Where the Creek Runs Clearer is currently on exhibition at the Kanien’kehá:ka Onkwawén:na Raotitióhkwa Language and Cultural Center. (Jessica Deer, The Eastern Door)

Around two dozen pack baskets, old-time sleighs, cornhusk dolls, cradleboards and long bows are currently on display until next Friday as a part of this year’s Cultural Awareness Month.

“I’m proud of it, I’m proud of the kids. I think they’re excited to have their work. They did it, but to have other people to go admire it, I think it also lifts them up too,” said Kristine Barnes-Jacobs, a prevention worker for Where the Creek Runs Clearer.

The pieces were created by past and present participants of the program, which is run by Kahnawake Shakotiia’takehnhas Community Services’ Family and Wellness Centre.

Diabo has been the facilitator of the program since it started in 2001, offering activities to youth based on traditional culture and teachings, including everything from running a garden, picking medicines, moose hunting and fishing.

“We gear a lot of our activities according to the moon and season. In the springtime, it’s all about the seeds, planting and food, and so on. In the fall, it’s canning and preserving and in the winter there’s a lot of indoor educational classes that will take place,” said Diabo.

“We want these kids to grow up to be my age to know all this stuff as naturally as tying a shoe.”

Even when making some of the items currently on exhibition, Diabo said the youth were involved from the beginning process – even picking the tree, chopping it down, splitting it, and preparing all the elements for their cradleboard, basket or bow.

“Sometimes when we’re doing those things with wood, it’s a Saturday – we’ll travel to the woods, pick a tree – ash, hickory, silver maple, sugar maple – a variety of trees. Every tree they pick is right, what we teach them is what it’s used for,” said Diabo.

The program currently operates all year round with around a dozen youth and their families meeting every Tuesday evening at the Family and Wellness Centre.

“What is interesting, before it was a lot of kids, but now there’s parents and grandparents attending. I just love going there with him because it allows us to have time together. We sit there and tell stories,” said Natalie Beauvais.  “It’s quite amazing what they teach and the values that they instill in the children.”

Beauvais’ 12-year-old son Patrick Zachary has his longbow, cornhusk doll, cradle board, and sleigh as part of the exhibition.

“For the long bow, you have to file them. It’s a very long process, but very worth it,” said Zachary. “I’ve actually been using my longbow to hunt. It’s very powerful and actually works. It’s not just a useless thing.”

Zachary, a student at Kuper Academy, has been a part of Where the Creek Runs Clearer program for the past three years. He said although he’s become increasingly busy with after-school programs, he’s still interested in being involved when he can.

“The people are nice, I get to learn about my culture. The activities they provide for you, they teach you about rites of passage, roles and responsibilities,” he said.

“I think it’s very important because they learn more about our culture because I think people should get more involved in the community.”