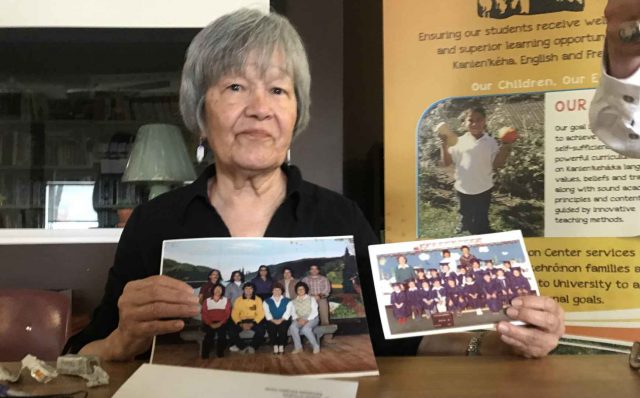 In December, the Kahnawake Education Center (KEC) received a $35,000 grant from the National Indian Brotherhood Trust Fund to support education programs aimed at healing, reconciliation and knowledge-building to address the long-lasting impacts of the Indian residential school system.

On Wednesday, the KEC announced that the money would go toward establishing cultural foundations within the education system through a revamped curriculum.

“The grant was to establish and solidify cultural foundations within the Kahnawake education system through the development of a comprehensive Kanien’kehá:ka-based curriculum, which we’re now calling Tsi Niionkwarihò:tens curriculum,” said Robin Delaronde, director of education.

She said the project has three main elements, including incorporating foundational teachings that residential schools took from the community, and reviewing existing Kanien’kéha language programs in all of the KEC’s schools in order to develop recommendations that help enhance them.

“It was a real awesome opportunity to hear from the people who are doing the work, and to be able to discuss as a community what Onkwehón:we education truly entails for us as a community,” said Stacey.

Her report includes findings based on consultations with staff, students and community members.

“The National Indian Brotherhood Trust just gave us the space we needed to have the discussions, and deep discussions about how education, rooted in Onkwehón:we epistemology, is so important to continue as a people,” said Stacey.

“Strengthening what’s there (in schools) is really the whole purpose of Onkwehón:we education – to rebuild and reclaim the things that residential schools and Indian day schools had denied us in the past.”

Kakaionstha Deer, a former principal at Kateri School and residential school survivor, sent a letter of support for the education centre’s grant application.

“When I was in residential school, there was no play,” said Deer. “When I became a teacher of nursery, I played. That’s where I realized, going back, I started my true healing.”

Deer, 77, was sent to residential school in Spanish, Ontario.

“I’ve also been on my healing journey for over 25 years, trying to regain my identity as a Mohawk woman. It’s been long and painful,” she said.

“The severe punishments of speaking my language still echoes through my head – fear. We cannot allow another generation to experience the painful uncertainty of not knowing who they are.”

Delaronde said while the first phase of the curriculum development is done, work still needs to be done, including developing pilot projects within the schools that reflect Tsi Niionkwarihò:tens.

“As we build the different elements that Kahtehrón:ni has identified as a part of this curriculum, we have to start developing those elements now – start looking at what does it really mean what that would mean from nursery to grade 11,” said Delaronde.

“When we say KEC Tsi Niionkwarihò:tens program, we want to ensure and have everyone in our community know what it means. It does not only mean that we’re talking about land-based learning, or doing beadwork, we’re talking about everything – high academic standards and putting science, language arts, math and all these areas into our teachings.”