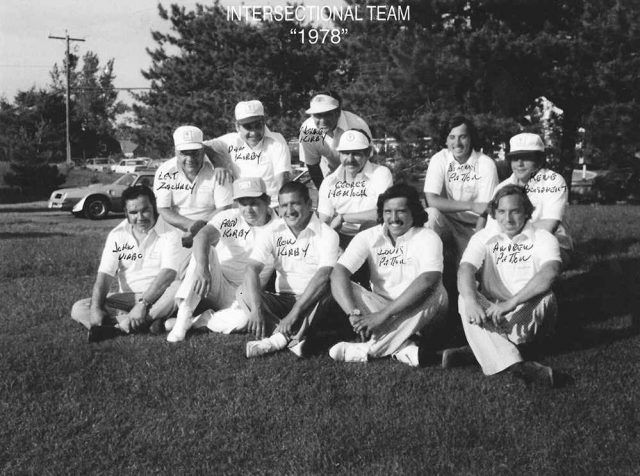 This week’s rain pushed the snow and frost out of the ground, leaving everything wet and soggy. What’s a nightmare for outdoor Paper Mache enthusiasts is heaven for golfers like Jimmy Patton, who will watch as the grass on his family’s greens at Caughnawaga Golf Club start to warm, firm up and set for the season.

“The golf club tells you when it’s ready to open,” said Jimmy, who tells patrons to expect April 14 as an opening date, give or take two weeks.

This year begins the 50th at the club that has a range of events, parties and special surprises for those walking its links.

In 1967, Expo was coming to Montreal, the Toronto Maple Leafs won the Stanley Cup (you’re welcome Leafs fans), and a couple in Kahnawake (Caughnawaga at the time) decided to plant some grass to build a place locals could swing a club at.

“It opened as a nine hole mom and pop with my mother and father, Angus and Mary Patton,” said Jimmy.

Jimmy’s ironworker father ran the golf club and grocery store (now the Mohawk Market) along with slinging steel and applying his trade in New York City.

“She (Mary) had a bunch of things with five screaming kids,” said Jimmy.

In addition to Jimmy, the family included Carrie, Andrew, and the late Louis and Cheryl, both of whom passed away in 2012.

The golf club expanded in the early 1970s to 18 holes and to 27 in the 80s, as it continued to attract local and non-local golfers throughout the region.

“Since then, the course has been consistently evolving,” said Jimmy. “It went through a big overhaul in 1990, and since then it’s been tweaked and tweaked to what it is now.”

Half a decade later:

Jimmy said several times while speaking with The Eastern Door that he is never one to stay in the past, as the club gets set to launch its 50th anniversary season, complete with new logo, leagues, and parties.

Management is overhauling the league play this year to celebrate the five decades.

“We’re revamping the leagues,” said Jimmy. “It’s a value-added service that we’re doing for our 50th anniversary. It’s going to blow your socks off.”

Jimmy added that staff is in the process of starting a new league for the half-century mark.

“I think they’re going to love it,” he said. “It’s going to add a whole new dimension to the place for their experience.”

“The Friday night mixed league is fun with a bit of competitive edge,” said the former Mohawk Council grand chief.

“You play as a team with your significant other and other couples on the red nine. Dinner and libations after in the clubhouse. Good times with good people. I look forward to it every week.”

Jimmy says his goal is to remain ahead of trends and continually work to keep the club a place people want to come to in a competitive environment, with several other golfing options in Kahnawake.

Jimmy is also a board member with the National Golf Course Owners Association.

“It helps you plan your forward movement,” he said. “Instead of just going ahead without a plan and making things up as you go along, this gives you a focus on how to continue to move forward.”

The club will host the qualifying round of the Canadian Men’s Senior Championship in September and its signature event of the summer, a Labour Day party celebrating five decades, and honouring the memory of Jimmy’s father Angus, who passed away Christmas Day.

“A proper party to celebrate the 50th year of the Caughnawaga Golf Club, which was his creation, the family’s creation, my mother’s creation, the community’s creation, all our non-community member’s creation; they all had a part in it. A lot of them have passed on. We’ve seen so many people throughout the years. It’s unbelievable.”

The Eastern Door asked Jimmy what it was that made his club special in the community.

“One of the things that we have is that we’re all golfers,” he said. “We were all brought up with a golf club in our hand, so we not only understand the business because we were brought up in the business, but we also understand from the perspective of a golfer.”

“I’d like to thank the Patton family for their role in helping me appreciate the game,” he said. “Their generosity to me over the years is not forgotten.”

Jimmy said it’s not hard to stay motivated in running a place like Caughnawaga.

“It’s a labour of love from my perspective, and there’s so many parts that go into it,” said Jimmy. “The people that staff the golf course, create the atmosphere of the golf course. We’ve been very fortunate that we have good people in place. I’ve been to a lot of golf courses where they might as well just put a turnstile on the first tee, a nice place, but no character. The reason why we call it a golf club is that word ‘club’ means more.”

Though excited at the prospect of running the club into the next half-century, Jimmy knows there will always be a piece missing.

“Knowing that he (his father) was always there, yeah, there’s a void,” said Jimmy. “There’s a bitter-sweetness, no question about it.”