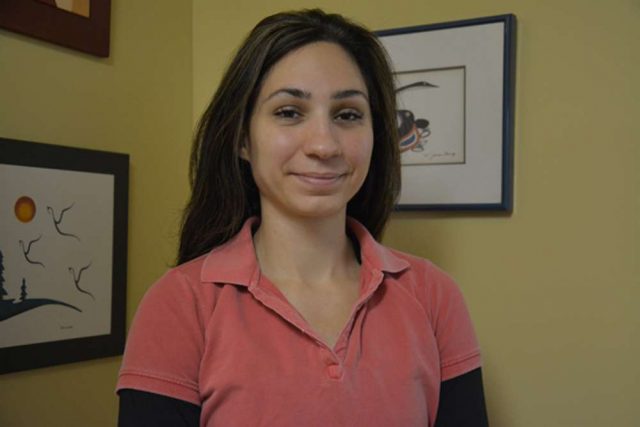 In addition to being a certified welder, Jenny Lahache is an independent massage therapist. (Jessica Deer, The Eastern Door)

Jenny Lahache knows very well that life’s path often looks like a maze rather than a straight line.

Nearly a decade since initially pursuing a trade program at the NOVA Career Centre in Chateauguay for welding, the 31-year-old recently completed the program and started working in the field.

“I did maybe six months out of the 16 months, and I got pregnant with my son so I stopped,” said Lahache.

After having two children and being a single mother, she decided to put her interests in welding on hold. During that time, she found a passion for massage therapy, graduating in February 2014 from a massotherapy program.

“I needed to do something that was flexible enough, but still gave me a decent income,” said Lahache. “I kept that part-time, and for that I do more as passion. I’m not doing it to make tons of money. I wouldn’t be able to do it for that because I feel it’s like a healing type of thing. Getting a lot of clients is not my goal, so I have my regulars where I go to their house or they come to me.”

Lahache also continues to pick up a number of shifts as an independent massage therapist at Playground Poker Club.

With her two children now enrolled in elementary school, Lahache felt it was the right time to return to welding. She re-enrolled at NOVA in February of last year, to complete the last 10 months of the program.

“I actually found it more different going into massage because my daughter was two years old or even a little younger. That was a lot of studying, I had to memorize anatomy and physiology, so that was a little more challenging because I hadn’t done academics since university,” said Lahache.

Lahache finished the program in December, and since February has been working in Ste. Catherine for Inox-Tech, a manufacturer that offers customized system designs, fabrication and installations for a wide variety of industrial applications.

“I’m hired as a TIG (Tungsten Inert Gas) welder,” she said. “I just got in at the right time with this company where they’re just starting to expand a little, they’re getting more jobs. The people, my coworkers – they have great experience. I couldn’t ask for a better place.”

“It’s very, very hard to find a decent job in general. I actually ran into a few problems being a female,” said Lahache.

Welding being a male-dominant field, Lahache was one of two women in her class at NOVA. During her first job interview following graduation, she was surprised by the attitude of the company.

“The practical went fine, and then I did a grinding test, which is absolutely nothing – of course I could grind (prepare pieces to be welded properly). The lady in the interview told me that the welding inspector said I looked uncomfortable grinding, so I’m not hired.

“The words that actually came out of her mouth was that they don’t typically hire women because you’re on you’re feet for many hours, then I guess she saw the expression on my face and quickly re-worded what she said,” said Lahache.

“Are you kidding me? I went to school for this. Do you think we were sitting down all day? It blows my mind still, and this was coming from a woman. That seems to be pretty common, women are looked at differently.”

The physicality and hands-on work in the field are exactly what drew Lahache to welding in the first place.

“I was just in university, I was enrolled in my early 20s in leisure science. Four years concentrating on one thing – I just wasn’t 100 percent sure if I wanted to do that, so I looked up trades. At first, what was offered to me was secretarial, hair dressing – all the typical female jobs,” said Lahache.

“Welding caught my attention a little more because it’s more physical. I enjoy physical things in general. Welding is really difficult, there’s a reason why it’s a 16 month-intensive of just welding. I enjoy testing my patience, challenging myself in that way, so I enjoyed the whole program.”

Now that she has certification in two trades, Lahache sees herself expanding her technical expertise.

“In the future, I’m thinking of maybe something business-related. Now that I have a job, I can save up for something. I’ve been below the poverty line for years. This is actually the first time I’m kind of comfortable living, financially,” said Lahache.

She’d also like to take more courses in massage therapy to expand the type of services she can offer to clients.

“There’s ashiatsu where you walk on peoples’ backs. You just have to get bars installed on the ceiling. When I get more settled with everything, I’m probably going to take some night classes in psychology and will just kind of go where the wind takes me. Whatever comes up and interests me, I’m totally going to go for whatever comes my way,” said Lahache.