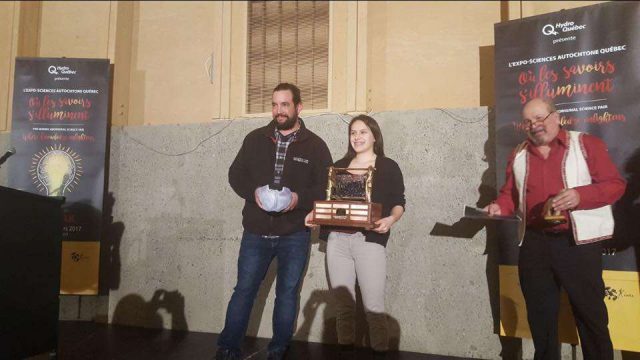 Konwanakeren Diabo will be heading to the Canada-Wide Science Fair in Regina next month to represent Kahnawake and First Nations in Quebec. (Courtesy Curran Jacobs)

Three students from Kahnawake walked away from last week’s Quebec Aboriginal Science Fair with prizes for their projects, and Kanesatake came in with a strong showing, including the only Mohawk in first place for Secondary I.

The province-wide competition took place from March 28-30 at Kiuna Institution in Odanak.

“We had a lot of enthusiasm from our kids from Quataq to Kahnawake, Timiskaming and Mashteuiatsh. We had a good turnout – 18 communities,” said Marc Lalande, president of the Quebec Aboriginal Science Fair.

Konwanakeren Diabo received second place in her grade category for her project “The New Cradle Board,” which transformed a traditional cradleboard into a seat with hinges.

“When I was coming up with a project my intention was to modify or innovate something traditional, or related to our culture. What had happened was that my mother had a dream around that time and she dreamt she had a bendable cradle board, so I decided to make one,” said Diabo, a student at Kahnawake Survival School.

In addition to winning second place, Diabo’s project earned her a special cultural and heritage award. She was also selected to represent Indigenous students across Quebec at next month’s Canada-Wide Science Fair.

“When I got my second place I felt really happy, but when I got the cultural heritage award and a spot to go to Canada wide I felt way more proud because I honestly didn’t think I had done that good,” she said.

“There were a lot of creative projects and a lot of confident people, so I was a little self conscious because I was nervous I wasn’t going to be as good as the other people, but I had only gotten good comments from all my judges. They told me I was well spoken and did a good job giving the presentation so I felt a lot better after that. Over all it was a really cool experience.”

“I feel really happy. I felt confident, so I thought that I would win and my mom was proud,” said Condo about his winning project.

“My project was on bottle flipping. I picked it because everyone likes to do it and I found it as an excuse to do it during class. For my hypothesis, I checked which quantity of water would land the best. It turns out that the 100 ml out of a 500 ml bottle landed the best because I think it had enough water to absorb the shock from the plastic and the force hitting the table.”

The 56th edition of the Canada-Wide Science Fair takes place May 14-20 in Regina at the University of Regina to recognize students from Grades 7 to 12 that have identified solutions to a local, regional or global concern through their science project.

Before she leaves, Diabo will be working on a third prototype of her cradleboard.

“My main concern for my cradleboard is to make it as safe as possible, and I am looking for alternatives to fix some pieces I had used on my board before,” she said.

This marks two years in a row that a student from KSS has been to the Canada-Wide Science Fair. Last year, grade 10 student Tehotenion Skye competed at the weeklong event for his project “The Door Stop,” a durable low-cost mechanical door opener as feasible alternative to expensive automated systems.

“We are quite pleased to see that and well, we hope that she (Diabo) is going to win something. Even if she doesn’t win, to go there and be a part of the 500 best students in science in Canada is something,” said Lalande.