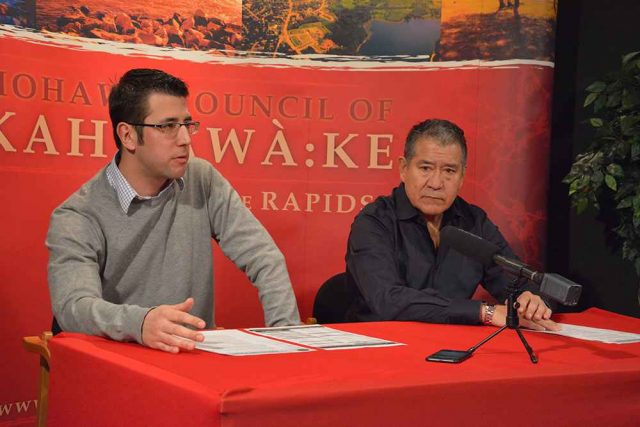 Paul Rice and Joe Norton may have smiled briefly as they announced a surplus in this year’s MCK budget. (Jessica Deer, The Eastern Door)

In announcing the first budget to surpass $50 million in Kahnawake’s history, Rice and Norton explained that it came with an over-$11 million surplus that will be put back into reserves that have been used to even out budgets in several years past.

“It’s just an all-around very good feeling in the way things are evolving and will continue – I’m not just saying hopefully – will continue to evolve as time goes on over the next few years,” said Norton.

The Continent 8 money is the first of 10 such payments. The original $25 million payment the MCK received after selling Continent 8 remains untouched to date, according to Rice.

“The MCK nor Tewatohnhi’saktha has spent a dime of that money since we received it following the sale,” said Rice. “In the short-term, the plan is going to be to invest that $25 million in order to earn income and create more revenue streams for the community.”

Rice said the investments would be low-risk, secure ones in the short-term with a long-term goal of setting up a development fund to generate more income.

“At the end of the day, we’re looking to build wealth,” said Rice.

Norton said, though newly re-elected to the office, he could not take all the credit for not needing to touch reserves or use money from mortgage interest in the housing loan program.

“I want to make it clear that I do take some credit for it, but I can’t take all the credit,” Norton told The Eastern Door.

“I take credit in terms of having been there to help negotiate the C8 deal and making sure that we’re going to concentrate on the development of the fund, but all the other issues that were there already existed.”

“On top of that, there’s also been an increase in federal targeted funding to the community,” said Rice, citing the arena renovations and housing initiatives that have come in from the feds.

Norton spoke about the difference between the current Liberal governments in Ottawa and Quebec City to those he dealt with when he was grand chief in the 1980s and 90s.

“It was almost like you had to twist their arm and force them to do things,” said Norton.

“It seems like the strings have been loosened, and I guess it’s due to the fact that we’re here, we’re not going away, we make demands and we do what has to be done, and we create a relationship with the governments, with individuals and what have you. They’re not always the best relations that are created, but generally they do lead to concessions.”

When re-elected in 2015, Norton made it a priority to push where needed to ensure outside governments knew Kahnawake had plans and intended to pursue those plans.

“When I first got elected I said, ‘we are not going to continue to do business the way it’s been done over the past few years, that’s not going to happen. We’re going to make sure we make progress,’” said Norton.

For the past five years, the MCK has asked departments to lower expenses, and Rice said the levels that have been maintained were impressive.

“I think what’s most impressive is that we’ve been able to maintain a steady growth in operations without adding any expenses,” said Rice. “With inflation and the cost of doing business, to be able to only have our operating expenses grow at about two percent demonstrates the diligence and good management that’s happened within the organization.”

Rice added that $3 million would be invested in the near future for socio economic programs to improve underfunded sectors of the community. An MCK Strategic Plan was released Wednesday with four pillars (protect, build, support and govern), as the main objectives.

The plan includes 15 key outcomes to be completed by 2021/22, including improving the Community Decision-Making Process (CDMP), implementing the Kahnawake Justice Act, developing a land use plan, and constructing a new community building with a museum, cultural centre and theatre.

Norton would like to see the welfare ranks full of only those who need it to supplement pensions, or assist those who cannot work due to disability in the near future.

“That’s an ongoing concern, and looking at it long-term we’re trying to come at it from several ways,” said Norton.

“I have an idea in my mind which has not been fully fleshed out with the council, but at some point will be, and that is to eradicate the welfare department as much as possible, reduce it to its bare minimum.

“Having said that there’s something else you’ve got to replace it with, and that is opportunities, jobs, job creation, also educational opportunities. There should be, in five years from now, a strict, strict reduction in that particular area. Instead of having a $6 million figure for welfare, it’s down to zero, or minimal.”