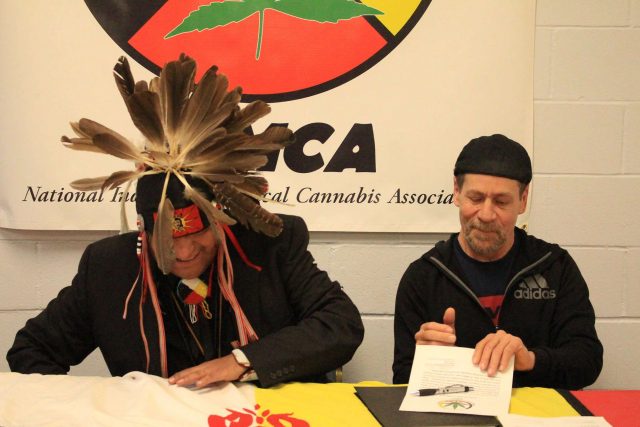 With the federal government expected to legalize recreational marijuana use by 2018, Indigenous people across Turtle Island are trying to stay one jump ahead of the competition.

The National Indigenous Medical Cannabis Association (NIMCA) was officially launched on Saturday in Tyendinaga, with the goal to promote and defend Indigenous peoples relationship with cannabis.

“We are not allowing the Canadian government to regulate the Indigenous medical cannabis industry. You know who is going to regulate that? Indians,” said Brian Marquis, who was elected at the president of NIMCA’s Ontario chapter.

“All we are doing is asserting our sovereignty by developing another economic base for our seven generations.”

Marquis has been a patient at Legacy 420, Tyendinaga’s first medical cannabis dispensary, for the past three years. He said last year, the company pulled in significant profits, giving money back into programming for the community.

“Our little store in Tyendinaga pulled in $28 million last year. Could you imagine if we put stores in Kahnawake?” said Marquis.

“Our community at first was a little skeptical. I want people to know that we’re not drug dealers. What we are is a group of Mohawk men and women, and other Indian people from all over this country. This is not a bad thing for our communities, this is a good thing.”

The ability to benefit communities economically is what is driving Kanehsata’kehró:non Clifton Nicholas’ involvement with the new association.

“The communities can benefit from that. I look at the community, and this is what attracted me to what they’re doing, because they give back so much. We’ve become so dependent on those federal dollars – they do anything they can to keep us down,” he said.

“Onkwehón:we people, the original people, most of us don’t even have a pot to piss in. It’s outrageous. There’s a billion-dollar market that is being developed right now with medical and recreational cannabis. We need to get in there before we get shut out.”

Marquis said the group is also promoting the benefits of cannabis as an alternative to dealing with the opioid crisis in First Nations communities.

“We have a 64 percent success rate when it comes around to treating people with opioid addictions,” he said.

It’s something Marquis has had personal experience with, being on painkillers for eight years following a back injury.

“I got to my doctor one day and said, you know what doc? I’m just going to stop taking these things. I don’t really like them and they don’t work really well for me anymore. He laughed at me and said you’ll never get off those,” said Marquis.

“I stopped that day and never took a single one of them. Cannabis didn’t stop the withdrawal symptoms, but they helped me deal with them.”

This new association isn’t the only Indigenous group turning to the cannabis industry as a source of socio-economic development.

Last month, the Mohawk Council of Kahnawake (MCK) announced the idea of entering the medical and recreational cannabis industry at its winter community meeting.

MCK grand chief Joe Norton said council is continuing to research the idea, including an upcoming visit to the Toqibue First Nation in New Brunswick to check out their newly constructed medical cannabis facility.

“They have not applied for a license from the federal government. They’ve gone ahead and designed what they have to design. They’ve empowered themselves to do what they’re doing and they’re moving ahead with that. They’ve asked us to be involved with them from a nation-to-nation point of view,” said Norton.

“I’d just like to make sure people understand that we’re working diligently, getting them as much information as we can and deciding whether or not this is something to go into. There’s two facets to it, there’s a medical side and the benefits from that, then there’s the business side and whether it’s lucrative enough to do this given that by next year it’s going to be legalized in Canada, then what’s the competition like?”

When asked about his thoughts on NIMCA, Norton expressed some concerns.

“This new organization has a lot of work to do, a lot of convincing to do,” said Norton. “There’s merit to it, but in terms of compliance with the laws out there and in terms of regulatory issues, I would be very concerned about what’s going to be developed as a result.”

As the newly-elected Quebec representative for NIMCA, Nicholas said he’ll be putting together a regional board consisting of Onkwehón:we across the province.

“After that we can start approaching communities and gauge what their interest-level is in medical cannabis,” said Nicholas.

However, he said the biggest obstacle they’ll face is the stigma attached to cannabis.

“There’s a lot of conservatism in our communities. I think we gotta start broadening our horizons a little more. We had to be conservative for the longest time to preserve ourselves and to fight against the encroachment of white culture, I understand,” said Nicholas.

“The future in this industry is right now. It’s a billion-dollar industry and we’d certainly be fools if we let that pass us by.”