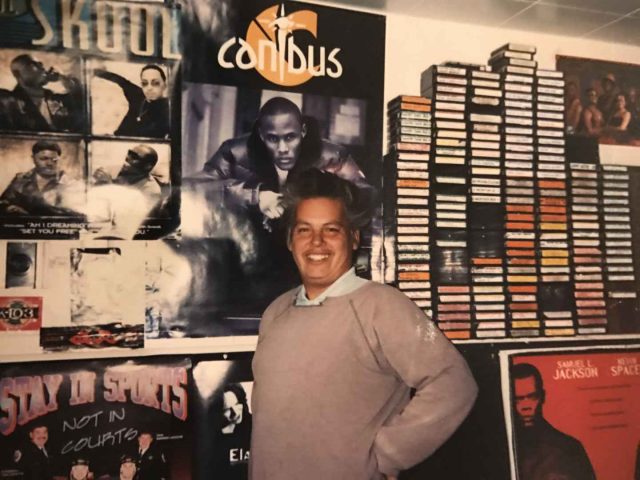 Eugene Stacey passed away on March 18 at the age of 63. (Photos courtesy Debra Stacey)

Kahnawake said goodbye to one of its most unique community members yesterday.

Eugene Stacey, who was known for his nickname ‘the Fishin’ Magician,’ passed away on March 18 at the age of 63, after suffering a heart attack.

“He was the biggest social butterfly I know. Always laughing, always joking, always hugging. He just loved to hug everybody. He was friends with everybody,” said his younger sister Debra.

“He just loved life. He also loved Elvis Presley, and he was definitely known for his love for sneakers. Somehow, someone would always be giving him some sneakers – high tops. He talked to everybody about his high tops.”

That’s one of Gary Beauvais’ most memorable moments of Eugene. The two were friends for more than 40 years.

“I remember in the late 60s first meeting Eugene,” said Beauvais. “He hung around my Grandmother’s chip stand and Louis and Annie’s store next to the chip stand. He loved flexing his large biceps around us younger kids. He was as strong as a ox in his heyday.” Beauvais recalled one day waiting for the Lachine bus with his grandmother and Eugene rode by on his bicycle.

“His sneakers were in tatters. My grandmother said she would buy him a new pair of sneakers,” he said. “I chose him a pair of Adidas Roms, the sneaker of the day. She also bought him a pair of dress shoes. He was forever grateful and for decades he always brought up this story whenever we met.”

It could be, Beauvais said, how he got his other famous nickname, Sneaker.

When Peacekeeper Kyle Zachary was the host of K103 Radio’s morning show, he also split his time on the independent wrestling scene and worked during the day at Anna Andrea Montour’s store.

He said Eugene would pop in the store every day for an hour or two.

“Mostly to trash talk me about how he was going to take my recently won Quebec Heavyweight Championship belt away from me, and that I should put him on the radio show because in his words ‘a lotta people wanna hear from me,’” said Zachary. Eventually, Zachary brought Eugene on the show, and they agreed to have a fishing derby between him and the morning show’s intern.

“Well, there are a few things you just don’t do. You don’t tug on Superman’s cape, you don’t spit into the wind, you don’t pull the mask off the ol’ Lone Ranger and you don’t get into a fishing derby with someone named the Fishin’ Magician!” said Zachary.

“By the end of the show, the fish were counted and Eugene destroyed morning show boy by a score of 21 fish to two! I don’t even know how he did it? He was truly a Fishin’ Magician!

“He was presented with the morning show fishing derby spectacular trophy, which was a plastic wine glass covered in aluminum foil, but Eugene was the happiest I had ever seen him, that day.”

Eugene spent a lot of time on the water, taking after his father, the late Harry Stacey. That’s how Brian Goodleaf met him.

“I’ve come to known Eugene about 40 years ago through my dad. When I used to go fishing at Johnson’s Beach, you’d see Eugene. He was born on the water, he was there, and we’d take up conversation and that was it, basically,” said Goodleaf.

“He was always around. He’d stop in for lunch, he’d stop in for supper. He has a knack for always knowing when we were having supper,” said Goodleaf.

“He was always willing to help. He loved our family, he cherished my wife, he cherished (Goodleaf’s son) Zach as if he were his own. He was so protective of everybody. He was one in two million, that’s for sure.”

Other community members shared well-known photos of Eugene during the Oka Crisis, where he fought with Canadian soldiers. Debra said the outpouring of stories and memories from the community have filled her family’s hearts with joy during a difficult time.

“It is so nice to know that the community really loved Eugene, that he had brought so much to the community – so much joy, so much love, so much laughter. My heart is just overflowing with joy – all of us,” she said.

“He loved his community and I’m so happy to know that they loved him just as much. We cannot thank them enough for showing their love for Eugene and all their experiences they had with him.”