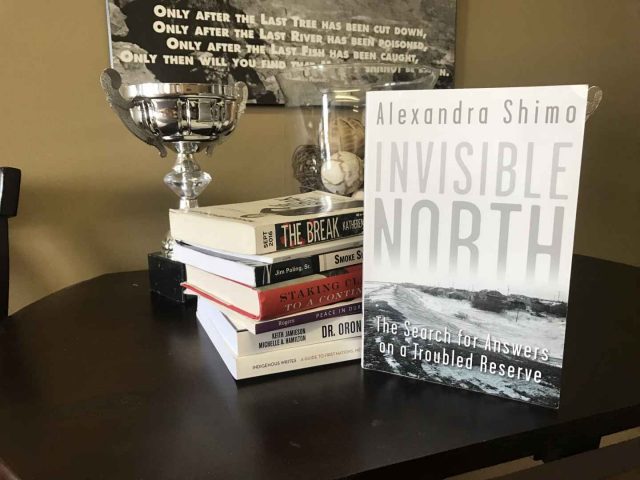 Search for directions to Kashechewan on a GPS, and the response returns, “can’t find a way there.”

It’s a fitting response from a machine that looks for paved roads and common routes to get places, but also is an apt primer to get your mindset ready for the reality of what the Cree community on the Albany River off James Bay in Ontario faces every day.

Freelance journalist Alexandra Shimo travelled to the community to investigate rumours of a potentially false water crisis in 2005, and came away with the material for Invisible North: The Search for Answers on a Troubled Reserve (Dundurn Press, $24.99).

The book is a hard and real look at a community that struggles to survive interior and exterior pressures that would shake the strongest of people.

Shimo travels to Kash (the name most locals use) via plane, lives in a closet with a curtain, drinks a lot of vodka, develops skin and mental health issues, is bullied, shoves a young girl, is stalked and taunted all while trying to put together interviews, track down leads and find out what happened in 2005 when the nation’s media outlets descended on the community after an E. coli outbreak.

It’s a fascinating, engaging, although very heavy book to read. While writing about her experience in the community and her attempts to uncover the water story, Shimo peppers chapters with the predictable and destructive history that led to a community made up of sub-par housing, nearly 90 percent unemployment, struggling institutions and the headline-grabbing issues like suicide that many remote communities face.

The policies and tendencies of the federal government are on naked display, and go from being hard to take to downright angering by the end.

Particularly frustrating are the job creation/revenue generation projects the Ministry of Indigenous Affairs has rejected over the years in lieu of circumspect or paternalistic plans that many Onkwehón:we communities have been presented with.

“None of the reserve’s employment plans had been approved,” Shimo writes. “Nor had the infrastructure that would make life livable: a fire department or flooding protection. Instead, what was given the go-ahead was another relocation, like that which had put them in the flood plain in the first place.”

Her life in the community is central to the book, and adds to the complexity of the story in a unique way. Readers get a sense of what community members are facing, but also what it could be like if one were to travel to the community and try to live a normal-ish working life.

She writes honestly and straightforward, and doesn’t shy from telling exactly how hard it is for her.

“With the escalating rumours, I start to get drunk every night,” she writes. “First the vodka that I’ve smuggled onto the reserve, and then, once that has finished, the salted cooking wine that I found in (her landlord) Emma’s cupboards. On the nights that I run out of booze, I call up Jill (her girlfriend). Together we decide that no story is worth my health or this amount of suffering.”

She gets a story, though, and more.

Through her experience, Shimo explores the trauma that the community has suffered through for over a century.

“There have been many things done to the northern Cree population,” she writes in the chapter “Rumours” after retelling being bullied by teenagers, who taunt her for being a perceived lesbian.

“They were forced to live on a flood plain, went to school at St. Anne’s Residential School, a place where children were tortured by electrocution in a homemade electric chair, were the subjects of medical experiments into the effects of malnutrition funded by the government, were gang-raped by residential school staff, and, during the Sixties Scoop, their children were kidnapped and never heard from again.

“What is normal in such oppressive circumstances is that nothing is too far-fetched to belie comprehension. People are on guard in search of the next threat.”

It is hard to read how Kashechewan, and many other communities, have been left in what Shimo describes as “fourth world conditions,” an impoverished community within a bountiful state that has proven inept at addressing its needs.

Every time a story arises in the media about a housing crisis, water issue or suicide epidemic, it is always predictably shocking and also predictably short in the news cycle.

Shimo shows, though this is a blaringly obvious statement, that the situation in communities such as Kashechewan is not right.

She has done her job to expose the problem, now its up to federal, provincial, municipal, local and council governments to start working towards a proper and long-lasting series of solutions for Kash and others like it across the country.