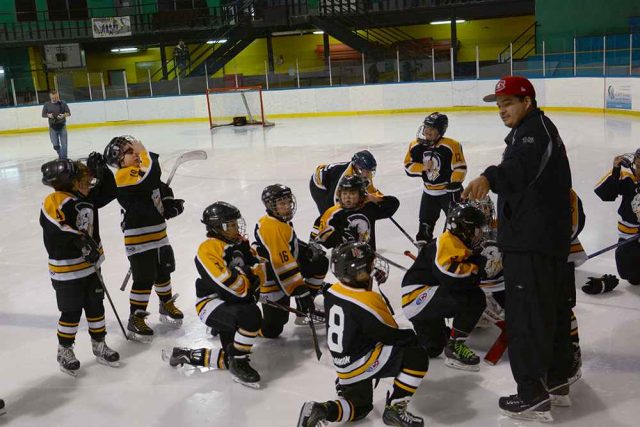 A decade on the bench was enough for lacrosse and hockey coach Curtis Diabo, who hung up his whistle and clipboard for the final time Sunday. He leaves a huge hole in the community’s coaching ranks. (Daniel J. Rowe, The Eastern Door)

Kahnawake Mohawks Atom BB coach Curtis Diabo watched the team he helped up a steep learning curve this season skate off the ice for the final time in Sunday’s 7-2 playoff loss to Verdun.

He decided it would be his last tour behind the bench in either hockey or lacrosse.

“I just had enough of it, the stress,” said Diabo, who coached year round for the past decade. “Too much stress, and bringing all the stress home is not good, so I need to take a break.”

Diabo has been a consistent and dedicated coach in both minor hockey and lacrosse, as Lisa Jacobs knows full well. She worked with Diabo in both sports.

“He is the kind of coach that sees things in the kids he chooses to put on his team,” she said. “He cares about each kid that’s on his team. He will be missed by the kids he coaches, for sure.”

He kept his announcement private, though he knew weeks before the last game that he’d be calling it a day, and posted a note on Facebook to announce his retirement.

“I knew it was my last game once we lost,” said Diabo. “I didn’t tell the kids in the room. I didn’t want to shed any tears in front of them. I wrote my speech a couple of days before, so I knew it was coming.”

“If he would have been able to be on the ice every day, he would have,” said Pitt. “That’s how dedicated he is. He’s definitely going to be missed in minor hockey, and in the other sports that he’s involved in. He gives his 100 percent.”

Diabo estimated he spent between one and two hours preparing for practice, in addition to a half hour to an hour after dealing with other issues. With that, along with stressing about who is going to play in the games, parents yelling at him, and everything else that goes into coaching, he was done.

Lisa Jacobs saw this first-hand as a team manager in lacrosse and division director in hockey.

“He goes above and beyond for the kids and it takes a lot of time away from his family time to be coach he is,” said Lisa. “Every time my son played for Curtis in provincials for lacrosse, they went to the gold medal game. He knows what coaching is about and he knows what needs to be done.”

Diabo has three boys with his wife Konwatsitsawi Phillips – Lucas, 13, Marcus, 9 and Curtis, 6 -, and a stepdaughter, Kaitlyn, 17.

He said in his Facebook post that he plans to dedicate his time to his family from here on.

Jacobs is holding out hope that Diabo will have second thoughts about hanging it up.

“Is he retiring? Maybe he might change his mind, I hope,” said Pitt Jacobs with a laugh.

A perfect example of Diabo’s quality as a coach was seen this year when he took on the challenge to coach a double-letter team with players, some of whom were single-B caliber, according to Jacobs.

“He did an excellent job,” he said. “We knew right from the beginning that we weren’t going to win too many games, if we won any. I told him, ‘just focus on development and more or less prepare the kids for next year because we will be doing a double-letter team, maybe even two.’

“That’s what he did. From how the kids were from their first game to their last game, there was a big improvement.”

Diabo spoke about some misconceptions fans and parents have, and added that dealing with parents was always the hardest part of the job.

“Everybody thinks you just go on the ice or the rink and everything just works like that,” said Diabo. “It takes one or two hours just to plan one practice. People don’t see that, and when you plan a practice and only half the kids show up, that practice is no more good because you set up a practice for 20 kids.”

Pitt Jacobs has no misconceptions about the loss to both programs Diabo will leave.

“He’ll leave a big hole,” he said. “We do have some coaches that can fill the gap, but he was a definite asset to minor hockey.”

Year in and out, Diabo put quality teams on the floor in both sports. The answer to why is simple.

“It’s dedication,” said Diabo. “If you don’t got dedication, and you’re just there so the kids can play, they don’t really learn too much. You have to be dedicated, put in your time, and put in extra time.”

He will now be in the stands watching his kids play, but definitively said he will not be back to coach.

He did admit to one regret over the past 10 years.

“The only mistake I made was I let it take over my life,” he said. “I think it’s because I never had a break. I didn’t take a season off of any sport.

Will it be easy to stay away?