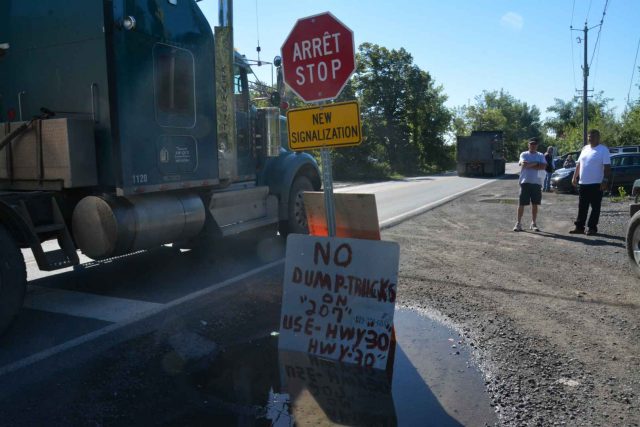 About a dozen community members participated in a small protest on a Friday morning in September 2016 to voice their concerns about the traffic, noise and trucks on Route 207. (Jessica Deer, The Eastern Door)

A recent report compiled by the Public Safety Commission is recommending a restriction on Route 207 to only local traffic during weekday mornings.

“Whether council approves it or not or wants to move forward or not, we’ll have that discussion within a couple of weeks,” said Ron Skye, commissioner of public safety.

The 58-page document, titled Public Safety Consultation and Traffic Data Report, includes traffic statistics, survey results from public consultation conducted last fall, and recommendations based on the data of how chief and council should move forward to address residents and businesses’ concerns with the traffic corridor.

“This type of survey was never done before and we’re sure that we’ll probably do something like this every two years, a reassessment of where we’re at and make other recommendations. Maybe not just to that roadway, but other roadways in the community as well,” said Skye.

In total, Public Safety received 208 written comments on the 585 surveys it received during public consultation with residents and community members who live in the area.

“As far as the substantial nature of the findings, it was a little bit different than the perception that the community had and the actual data from the survey itself,” said Skye.

“It’s a quality of life issue, that’s what it comes down to. People want to be able to have access to the side roads where they’re staying at and sometimes they can’t get across, and getting to the village in the morning is problematic with all the traffic,” said Skye.

“Even though it may have been perceived as a safety issue to initiate this consultation, it’s really a quality of life issue. The perception is that there’s a lot of cars speeding, trucks are speeding, and so on. But with the two-week survey that we did, we found that it didn’t hold true.”

CIMA+ Engineering was contracted to perform a traffic count operation on Route 207 for a two-week period from September 13-20, as well as from October 5-12.

“There were speeding infractions but they were late in the evening, not during the daytime hours,” said Skye. “If everyone maintains their speed, the roadway itself is safe.”

The volume of traffic that was recorded during the two-week period surprised Skye.

“It was a little bit more than what we had initially thought it would be. So it is a concern and played itself out in part of the recommendations that we’ve made,” said Skye.

The first recommendation is for council to restrict traffic from non-locals between 6:30-8:30 a.m. Monday to Friday between September 1 and May 31 based on the two traffics counts that were counted last fall.

The first count period was conducted during JFK Quarry’s work blitz to understand which factor, heavy trucks and/or traffic, were lending to the overall impacts on the road.

In September, the total average of daily vehicles during the weekday was 10,401, while in October it was 10,224.

On weekends the total average daily vehicle count in September was 7,573, while a month later it dropped down to 5,789.

During the morning rush hour in September between 5-9 a.m. the northbound traffic averaged only 2,618 vehicles, while in October it was 2,671. Southbound during the afternoon between 2-8 p.m. averaged 2,051 in September and 2,070 in October.

The company also looked at the average daily heavy vehicles traveling northbound on Route 207. In September, it was 565, and 222 a month later.

Public Safety is also recommending that council implement a heavy truck restriction to cover the village area and the Old Chateauguay Road, with exception for local deliveries.

“That is kind of a no-brainer for us,” said Skye. “We’ve already had our discussions with MTQ, so we’ll be sending them our red zone where trucks won’t be allowed within the next two weeks, then they have to put it in their transport traffic system, so the truckers know when they access this site that it is a red zone within the community.”

Another recommendation by Public Safety includes modifying the current heavy truck ban to allow trucks seeking to regularly access Kahnawake businesses from the Mercier Bridge, while maintaining their exit to Highway 30, at the discretion of the Commissioner of Public Safety.

During the public consultation, it was noted that 55 percent of survey respondents felt heavy trucks were of concern, however, 80 percent of the comments pointed to overall traffic and associated problems such as traffic, safety concerns, pollution, and the lack of ease of access as their main concerns.

The report also recommends that the MCK enter into specific discussions with the MTQ to fast track discussions related to the reconfiguration of the Route 207 and Highway 30 junction to allow for a safety access from Lot 106 to Highway 30, in addition to an access route for JFK Quarry via Highway 30.

“More people are building in the area, there’s only one way in, so if there’s ever a fire or something that needs to be done in that area, there’s no two-way access in and out.

“That is a public safety concern for us, so as we move forward to do the reconfiguration with lot 106, we would want to be consulted to ensure that we have some input as far as the designation of roadways and so on,” said Skye.

As the report was released late last week, Skye said the department plans on meeting with chief and council in the coming weeks.

“We need to give council time to review the report and digest it, so we’re asking for a strategic discussion with them in about two-three weeks,” he said.

“There will always be a give and take when you get recommendations from a different body.”