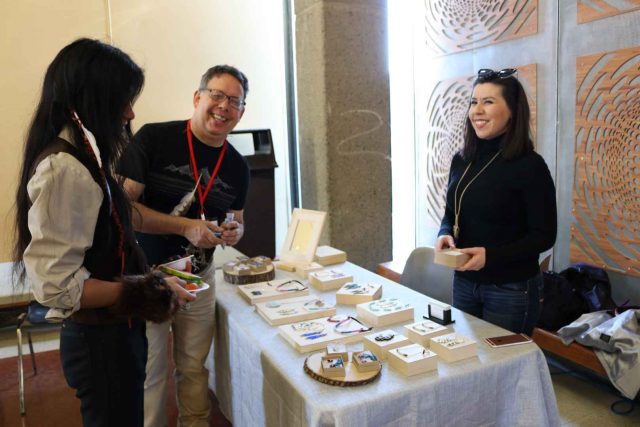 Artist Brooke Deer was excited to be a part of Saturday’s event that focused on Indigenous art in Montreal, and gave artists an ideal place to network and learn. (Courtesy Subhanya Jy)

The venue was McGill University’s Student Society building, and the theme was resistance and revitalization Saturday, as the school’s Indigenous Students Alliance hosted a day-long event of talks, panels, and workshops from over a dozen Onkwehón:we artists and teachers.

“We already had some notes from her, we got to call her when we were stuck, so it was a lot easier this year,” said Loft.

Throughout the day artists spoke on topics such as matriarchal implications in contemporary art, the healing journey of throat singing and arts-based research in community projects.

“I thought it was great from what I saw,” Claus told The Eastern Door. “I was very impressed with what they pulled together. I think my presentation went well, and I got some good feedback from people after, including a bear clan mother, so I figured I did pretty well.”

One hiccup on the day was keynote speaker Lee Maracle cancelling shortly before she was set to speak.

“We were told about 15 minutes before her presentation that she couldn’t make it,” said Loft.

Organizers scrambled, and Louise Macdonald stepped up to speak about the Ohero:kon coming of age program in Akwesasne for young men and women to transition into adulthood.

“She just stepped in and totally saved us,” said Loft.

The goal for organizers was simple.

“McGill doesn’t often have a platform for Indigenous students to speak or organize events and meet other Indigenous students,” said Loft. “Not even just at McGill but throughout Montreal, so we reached out to other universities and CEGEPs and through that we got to meet all sorts of people.”

Loft is the daughter of Kahnawake artist Martin Loft, who is an active promoter of Indigenous arts and their importance.

“I’m always inspired by his work,” said Carlee. “I’m probably one of his biggest fans. I have his artwork throughout my apartment and try to promote him in any way I can.

“I heard him speak about it so often, about how passionate he is about it, and how he sees art as a valuable form of resistance and it keeps evolving, and that keeps it new and relevant. He sees it as a really powerful medium for resistance and revitalization.”

Black Suede Jewelry designer Brooke Deer was set up at the event selling items, and was happy to be part of an event that focused on Onkwehón:we art.

“I treat my beadwork as more an art than a craft, so the crowd was perfect,” she said.

“Plus, I always enjoy networking with other urban Indigenous artists. There are lots of craft fairs in town, but you rarely see events for the art community, which is a shame considering the amount of talented artists we have.”

Part of the goal was to bring artists from across the city.

“They’re not necessarily the typical people that you’d invite to an academic conference,” said Carlee “It’s getting a voice heard in that area that maybe is not being heard, especially at McGill.”

Carlee hopes to attract more volunteers to the Indigenous alliance earlier next year, so there is not as much scrambling last minute.

Even with the setback, the response to the day’s events was overwhelmingly positive.

“We were not expecting anywhere near as much participation as we got,” said Carlee. “So many people came from so many different places. Not even just students. People just had seen the posters up and were actually just interested in the subject matter, so it didn’t take as much intense promotion on our part, which was a first.”