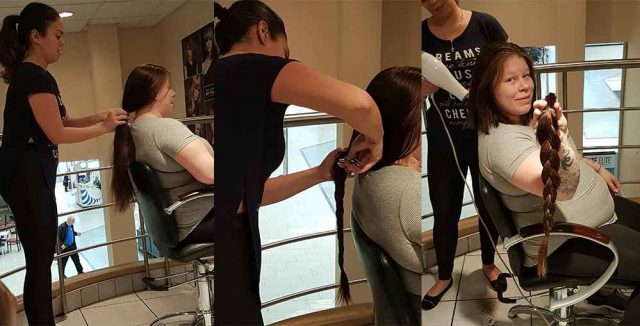 Megan Diabo cut her hair on Tuesday as a way to show support for a family member currently battling cancer. (Courtesy Jon Jacobs)

Megan Diabo recently decided to chop off her long brunette locks because she wanted to make a difference.

The mother of three decided to donate a foot of her hair to someone special in her life that is currently battling cancer – her boyfriend’s mother, Carol Boyer Jacobs.

Boyer Jacobs was diagnosed with breast cancer in late 2016 after beating thyroid cancer 10 years ago. She started chemotherapy yesterday.

“There’s a lot of people fighting cancer right now, and his mother is recently battling it again,” said Diabo. “She was discussing trying to find a wig, so I figured the length that I have now, it’s the perfect length to donate. I figured maybe I could donate my hair to her, or anyone else for a wig.”

Diabo cut it at a hair salon on Tuesday morning and prior to the cut, her long locks were down to her waist, allowing for a foot-length donation.

“I was a little nervous last night thinking about it, trying to find photos of short hair, lengths, and styles,” Diabo told The Eastern Door shortly after her donation. “I finally found one that I really liked and just went with it. I plan on doing it again in another six years.”

“She is a caring and loving individual who did this act completely on her own. I am still in awe of her gesture!” said Boyer Jacobs.

Diabo is currently waiting to hear the word if it’s possible for her hair to be used for a wig specifically made for her mother-in-law.

“His mother was going to be speaking to her doctor to see if I could just give her the hair and they’ll make the wig for her,” she said. “As long as it can show her that there are people willing to support her.”

Even if it’s not possible, the hair will still be put to good use to be donated to a non-profit organization such as Locks of Love or the Canadian Cancer Society’s Pantene Beautiful Lengths campaign.

“I was looking all over online and there are certain places that they’ll take it there or you have to mail it,” said Diabo.

According to the Canadian Cancer Society, it takes eight to 15 ponytails to create one real-hair wig for women who have lost their hair as a result of cancer treatment.

“To me, hair isn’t that sentimental. It’s just hair to me, but to other people it’s more than just hair.

“More people should help or donate in anyway they can – whether it’s cancer or any other illness, whatever they can do it for another person.”