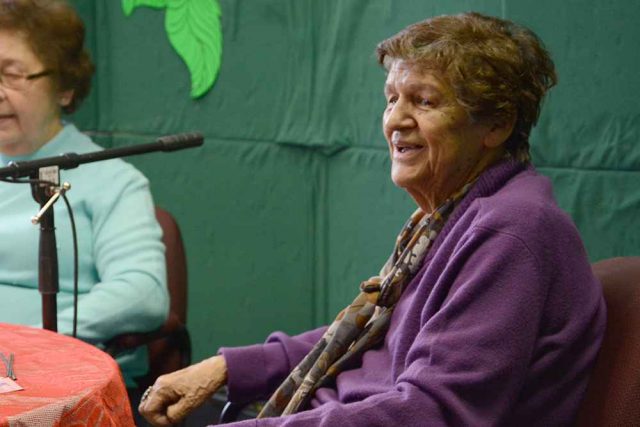 Karonhiaion Annie Cecilia Charlie let very little stop her from being out in the community, giving her opinion in English or Kanien’kéha on a variety of subjects important to her. She was a constant site riding her bike, chatting with people young and old, attending the longhouse or just enjoying the day.

She sadly passed away March 1 at the age of 82.

With obituaries, stories are generally told by those left behind, but in Cecilia’s case, Kahnawake was left with a gift from the woman who leaves a big void.

“Sisí:r” began writing a history of her life that two of her surviving sons, Paul and Louis, shared with The Eastern Door.

“I went to school here in Kahnawake at the age of six until I reached 16 years of age,” her memoire begins. “Then I quit because I hated school.”

Cecilia writes about helping her mother around the house “because my mother was not strong enough to do what was needed to be done.”

As a child, Cecilia chopped wood, carried water, went to the store and did what needed to be done to help her mother out. She also loved the water and spent her free time swimming and diving for change tourists would throw in the water.

Her first job was at a grocery store in Lachine called Spot’s for $5 an hour, which she worked at for two years before moving to Boston after a friend suggested it. She lived with her mother’s parents, and met her first husband there, a Navy second-class cook. The couple then moved to Detroit.

The relationship did not last, as she tells in her typical witty way.

“I told him to get a job as a cook or else I was going to come home (to Kahnawake) because I sure as hell didn’t want to live in a farm as his mother and father,” she writes. “So he thought I was kidding, up came the six months and he didn’t get a job, so I left; end of this. Ha ha.”

She returned to Kahnawake, worked at a restaurant before meeting and marrying her second husband, Rejean Pronovost, and had three children: Louis, and twins Paul and Peter. The family uprooted and moved to Gagnon, Quebec (10 hours north of Quebec City by car), and had three more boys: Darryl, David and Mark.

Living away from her community was not always easy.

“It took me a long time to get used to the place,” Cecilia wrote. “I came back every summer for vacation when the kids were out of school.”

She, however, never missed a chance to become involved in the community and taught as a substitute teacher at the high school, taught Sunday school at the local protestant church and loved ripping around the north on a skidoo.

The couple divorced, and Cecilia returned to Kahnawake.

“April ’76, she came back to get the paperwork started so she could inherit her house,” her son Louis told The Eastern Door.

Cecilia helped form the Native Women’s Association (now Quebec Native Women) in 1968 with the late Mary Two-Axe Early. Early and Charlie had lost their Native status for marrying out, and Charlie almost lost her family home.

“I fought very hard also not to lose my house,” she wrote. “I went in a lot of newspapers and on TV that’s when the band council gave up. This is why I live in my father’s house today because I never gave up believing.”

She (and many Native women in the country) regained her status, kept her home and worked tirelessly for Onkwehón:we women’s rights.

She formerly joined the Native Women’s Association in 1996.

Her memoir also includes anecdotes about her fight in the summer of 1990.

“I was sitting here at the table with a friend of mine, all of sudden we heard this helicopter go over my roof,” she wrote. “It was so close that we could see the soldiers that were in the helicopter, so we went outside to see which way they were going. They went towards the hospital.”

She writes about seeing soldiers on the island, and remaining at home throughout.

Cecilia was heavily involved with the longhouses in town, and, as anyone who listened to any of K103’s all-Kanien’kéha radio programs knows, the language. She worked on a project called “old stories of a long time ago” where she interviewed elders.

“I have already taped 15 elders,” she wrote. “Very interesting stories and I have learned a lot from them.”

She also wrote about reconnecting with a sister in the past eight years.

“She lived in Brooklyn for 35 years this is why I treasured the last years we got to know each other,” she said.

Cecilia kept her battle with cancer private, and few knew how sick she was nearing the end of her days. She went into the hospital December 26, and spent her final days there.

Cecilia was always out and about.

“She had a lot of friends young and old,” said Paul. “She was just a likable person. She would take the time to listen to everybody.”

The family is planning a celebration for Cecilia March 25 at the Golden Age Club.