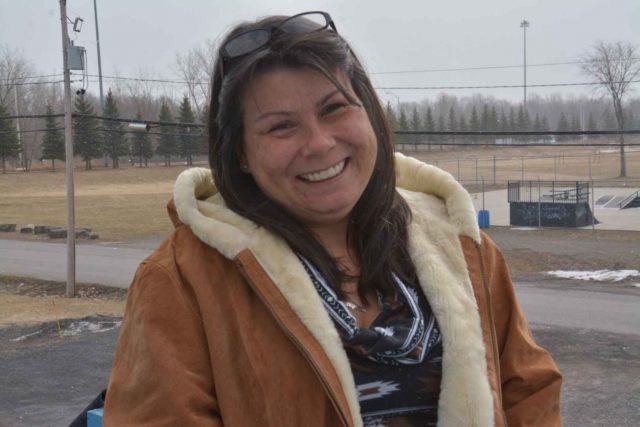 Jennifer Diabo is the first woman from Kahnawake to study to become an electrician. (Jessica Deer, The Eastern Door)

Kahnawa’kehró:non Jennifer Diabo was the first woman from Kahnawake to graduate from the Pearson Electrotechnology Centre (PEC) in Lachine, and she is working towards a dream.

“It was welding, plumbing, carpentry and electricity,” said Diabo. “One day it was like lightning, electricity hit me. When I was younger, my late uncle Michael, he was an electrician. I remember watching him draw the blueprints. I thought it was fascinating, I loved what he was doing.”

After the introductory program, Diabo applied to PEC.

“I did the entrance exam to qualify to go to the school. I failed by 1.5 percent, so then I hired a tutor, and I started re-studying grade 10 and 11 math, science, then I went back and applied to do the exam again. This time, I passed, but I never heard anything from them,” she said.

She spent over two years on the school’s waiting list before being accepted into the program.

“There were 60 applicants and only 22 spots,” said Diabo. “I made it, and was going at night time. I was going to school with a lot of immigrants, where they didn’t look highly on women, so a lot of nights I went home crying because they treated me very poorly.”

She was not only the only woman in her class at the time, but in the entire trades school.

“I’m the second female to graduate from that school, but the first Mohawk Native woman,” said Diabo.

During the program, she was awarded a $500 prize from Chapeau les filles, a scholarship program that showcases the determination and work of young women enrolled in a vocational or technical training program, leading to work in a traditionally male-dominated occupation.

“I wrote a powerful essay on my perseverance and how I once was in my life. I used to be a former drug addict. I’m eight years clean now. I was a victim of abuse. From there, I remember hanging a picture on the wall using my high heel and a nail because I didn’t own a hammer. I didn’t know how to do anything,” said Diabo.

“I was a young mother, I ended up quitting high school in grade 11 and had my family. Once I separated from their father, the first thing I did was put myself back in school.”

Going back to school later in life was a challenge. She completed her high school equivalency in adult education in a year-and-a-half, followed by a year in college prior to taking an administrative assistant vocational program.

The long journey to completing the electricity program also earned her an award from the school for International Adult Learners’ Week.

Since graduating in 2014, Diabo has been working on her apprenticeship.

“You need 8,000 hours to become certified, so I’m still working on that. It’s been a little bit of a hard time. I spoke with other electricians and a lot of places, they don’t really want to hire an apprentice because their insurances and everything goes up, unfortunately,” she said. “I’ve been working here and there. Doing private contracts and stuff like that.”

Even though she still has a way to go, Diabo has her eye on the future, with the goal to upgrade her French-language skills to become bilingual, with the goal of opening her own business.

“Two of my daughters, I’m teaching them how to do it. I’m making all the connections, but they’re there learning.

“They would both like to go to the school and to become electricians, so I’d like to have a company later on once I become a master – Jennifer and Girls, where it’s all women,” said Diabo.