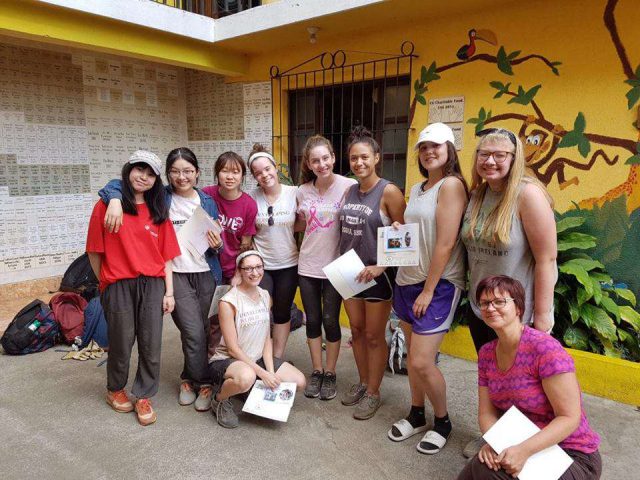 The girls from Trafalgar School and Kuper Academy bucked the trend of taking spring break on a beach and did something that gave them a broader understanding of other people, their culture and how they live their daily lives. (Courtesy Sabrina Diabo)

How did you spend your Spring Break?

Trafalgar School students Jaylin Rice-Douglass and Sabrina Diabo took the opportunity presented them to travel south, but not to soak themselves in sun on a beach, or spend quick cash on sneakers or souvenirs.

The girls, along with around 20 from their school and Kuper Academy, hooked up with the Developing World Connections organization and the program Open Windows, headed for San Miguel Duenas, Guatemala (just outside of Antigua), and helped construct homes for two families.

“I thought it would be a fun experience to go with some of my friends from school on our last big trip,” said Rice-Douglass, who graduates this June.

The building project was set up to help families whose residences were destroyed by the tropical storm Agatha in 2010. In addition to constructing the homes, the students fundraised to aid local children with scholarships for schools.

“It was a new experience, so I wanted to go out and try something new, and it’s life-changing,” said Diabo. “It seemed fun just to see how other people live in different countries was new to me.”

The girls were partnered with experienced locals, and, though no one on the trip had much experience in construction, grabbed tools and started building.

“When we got there, we were all pretty new to it, and we just kind of jumped right into it,” said Diabo, whose father Jamie Ranch Diabo is in construction. Sabrina has no intention of following in his footsteps.

The girls left March 4 and spent 10 days in and around the community, and got to see the response to taking the trip and helping out the families.

“The family was pretty excited that we were there,” said Diabo. “At the end of the trip when we were ready to say our goodbyes, he (the father) was saying how grateful he was that we were there to help him, and he couldn’t have done it without us. It was really heart-warming.”

In addition, the girls went to markets in the area, visited a lake and took a hike up an active volcano.

Diabo shared another unique experience from her trip that is likely to stay with her for her entire life.

“On the top of our hotel, on the roof, there was a sitting area, and you can see the mountains, and one morning we saw a volcano erupt,” said Diabo.

Seeing people in a harder position than they is something that the girls said was a valuable experience.

“It’s not the same housing, so it was surprising,” said Rice-Douglass. “One day we installed a stove and it was kind of new for them because there they said that the original way they would use stoves was on an open fire and they would be breathing in all the chemicals and stuff. We went inside someone’s house, and it was very much different. It had tin walls, and cement blocks, and to have a new stove for them was very cool.”

Certain complaints will likely be harder to voice after seeing what those in the area are blessed with.

Rice-Douglass would definitely do a similar trip again, and had advice for those who may be nervous to do something similar.

“Try to have a friend to go with you, so you have someone to be with,” she said. “We were kind of scared, but once we got there it felt very relaxed. Like ‘we’re here, and nothing will happen.’”

Sabrina agreed and added, “I’d tell people, ‘do it’ because they’d get to see how other people live and how different it is for them.”

The experience was a valuable one that Diabo is happy she took advantage of.

“I really liked it and got to see a new perspective of the world and how other people live,” she said.