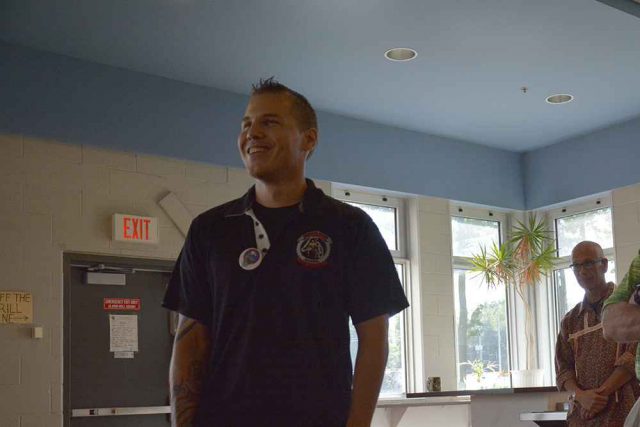 Two years is all it took for Kanen’tó:kon Hemlock to realize his place was in the classroom, and not administration.

“I was really mulling it over and pondering it for a few months,” said Hemlock. “In the end, I was really looking at where I’d be most effective and where my passion was. It would be teaching and working with the students, so I decided that for the time being I’d step back from this position to go back into the classroom. Maybe down the line, a few years more, I’ll go back to it (administration).”

The Kahnawake Education Center announced his departure this week along with an opening for an associate principal post at Karonhianónhnha Tsi Ionteriwaienstáhkhwa.

Education centre director Robin Delaronde explained that Karonhianónhnha previously operated with a part-time associate principal. Funding issues, however, caused the education centre to eliminate the position around three years ago, but with increased registration funding, the position has now become available.

“In the past few years what’s happened is we’ve begun to see more and more students and parents continue to keep their children in the school, requiring more services like speech and language, students services, counseling, that it now qualifies for a position to maintain an associate principal,” she said.

“Because the clientele is there now, because the need is there in other areas, and the funding is there, we’re able to say, ‘okay, we do need a full-time associate principal at Karonhianónhnha School.’”

For the last year, Wahienhá:wi McGregor has functioned as associate principal for the past year on a contract basis, and both jobs will have a tentative start date of August 7. She could apply for the job, if she desires.

The KEC decided to post the position rather than appoint it to give anyone who may have experience the opportunity to seek the job.

“With positions that you know you probably have a wide bank of people who could apply, we’re definitely posting the position,” said Delaronde.

Delaronde also spoke about the void that Hemlock will leave at Survival School, but knows that when he swapped roles from teacher to principal, another loss was felt.

“It’s a big loss in terms of the rapport he has in his department in student services, his leadership with them, and also with the staff,” said Delaronde. “But, it’s not a loss in terms of you know what he left, and it was a loss when he left the classroom.”

Delaronde said that Hemlock had been involved beyond the classroom before leaving to take the job in administration.

“When he left, he was working on larger scale initiatives for the whole school,” said Delaronde, who noted that Hemlock was involved in setting up the “Live Like a Champion” program.

“He had larger scale projects that not only benefit his classroom, it benefited the school and it was branching out,” said Delaronde. “I could see there was a loss there when he was put into that position, you could feel it.”

Hemlock appreciated everything that came with the administration job, but did yearn to be back working more with the students.

“Not to say that I didn’t enjoy the time that I was in admin, and not to say that I didn’t think that I was doing an effective job in helping out, but it was more that I was finding that I really wasn’t able to be on the ground with the students and teaching, and helping out with the different initiatives that were going on in the school, because there was a lot of workshops and meetings and the different disciplinary stuff that I had to deal with,” said Hemlock.

Delaronde spoke about the effect both Hemlock and principal Jackie Leclaire have had at Survival since taking the post and hopes that the next associate principal will be able to act in a similar manner.

“I have been quite satisfied because if you do have a staff that is behind you 100 percent as an administrator, even if things aren’t perfect, you know that they’re working hard for the students in the end.”

Hemlock said he has options about where he will go next, and is looking at how he’ll be able to help out most affectively.

He has no regrets at taking the job two years ago, as it added a valuable perspective.

“I’ve seen things from the other side of the desk now,” said Hemlock. “How the school functions, and system-wide all the work that needs to be done, just the amount of work and stress and time that goes into being an administrator. It was a really, really good learning experience.”