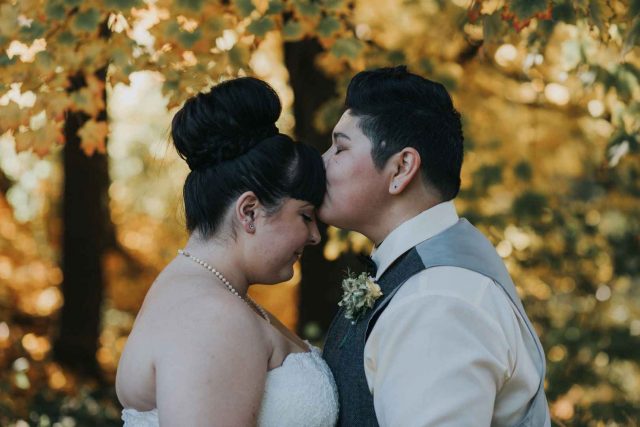 Want to see if the person you started dating is for real?

Do one simple thing: break your ankle, and see how they react.

A week into a new relationship with Amanda-Lee Phillips, 23-year-old Acacia Prophet did just that.

New relationships are often full of stress, anxiety, worry, insecurity, dread and panic, but not this one.

You see Amanda, also 23 at the time, is a paramedic.

“Her as a paramedic, she took care of me,” said Acacia, now 26, and married to the girl who showed up on her doorstep with a townie dinner of champions for their first date.

The Kateri School teacher and Kahnawake Fire Brigade paramedic’s relationship beat computer odds, timing and traditional wisdom of what to do on a first date, and was sealed October 15 of last year when they were married at Xavier’s Steak House, the local eatery owned and operated by Amanda’s parents Lloyd Phillips and Wendy Walker. The two’s story began on the dating site OkCupid after they both had been toiling in the single market for very different lengths of time.

“I would like to say too that I was on there for friggin’ months, and she was on there for three days!” said Acacia, daughter of James Prophet and Susan Scott. “I feel like, who gets those chances? I was so frustrated. How come it only took her three days, and I felt like I was there forever?”

Amanda made the first move and messaged Acacia after a wise $10.99 investment on the site.

“I actually paid for the bonus version where you can see who viewed your profile and it was all these weirdos and then she viewed my profile and never messaged me,” said Amanda.

After some back and forth messaging, standard Facebook creeping, and built courage, November 6, 2013 was set as the first date, and one that if it were different ladies, in a different situation with different intensions, could have been much worse.

“I’m the nutcase who decides I’m going to have a first date with a stranger in my apartment because I’d had so many bad first dates,” said Acacia, who admitted she is shy and had a hard time relaxing out on dates.

Home seemed like a better, if not riskier, option.

“Luckily she wasn’t a creeper or else it would have turned out horrible for me,” said Acacia.

Amanda showed up to Acacia’s apartment with a picnic tailor-made for Kahnawake. “I didn’t know I was super townie,” said Amanda. “I go there with a pizza, a six-pack of Twisted Tea in my backpack.”

Neither had high hopes going into the first date.

“I was looking to hook up,” said Amanda. “I literally just finished a five-year relationship and was, ‘let’s go have fun. I was never single before.’”

Acacia’s wishes were equally low for the first date after a few horror stories on the dating scene.

“I wanted a successful date,” she said. “I didn’t have high hopes.”

OkCupid’s algorithm, it seems, was also against the couple. The site gives couples a compatibility rating, and Acacia and Amanda’s was a meagre 50 percent.

Computers. What do they know?

“When we met it was instantaneous comfort,” said Acacia. “It was as if we’d known each other forever.” “The first time we met was November 6, 2013, and that’s when we started dating,” said Amanda. “It was instant dating.”

Well, almost. She still had to dump a clown (don’t ask).

The two fell hard and fast and didn’t look back.

“We fell into a fairly serious relationship quickly,” said Acacia. “I went to her family Christmas that year, which would have been like a month later. We were instantly connected and our families could see that it was something serious. It wasn’t some fluff relationship.”

Comfort and connection came despite the fact that they are the definition of opposites attract.

Acacia actually had to say farewell to her beloved tortie cat Sita, who she was forced to give to her parents because a) Amanda was allergic and b) the cat hated Amanda.

“That was like a big deal that I’m going to give up my pet for you,” said Acacia. “She did not like Amanda. She hated Amanda.” The two now have a French bulldog named Reuben, and plan to have children in the near future.

Compromises went both ways, as Amanda learned to travel Acacia-style. The two visited Acacia’s roots, and went to Ireland together.

Their opposing preferences, as is often the case, helped rather than hurt the relationship.
“I’m the typical townie, which is very different from the travel, tea and cat person,” said Amanda. “I didn’t have high hopes, but I also didn’t have that pressure to be like, ‘we have to make this work because our compatibility is 100 percent.’”

The two talked about marriage for about a year before August 2, 2015 when Amanda, wearing her finest sleeveless jean jacket and ball cap, got down on one knee and proposed.

Amanda chose a family vacation in Maine as the ideal spot. You know, so if it didn’t work out, she’d only have to explain it to her parents, sister (Kawisaronkwas Ashlan Phillips), aunts, great-aunts, grandparents and anyone else in the massive Phillips family. No pressure.

“Because it’s not just going to be me and her, it’s got to be a whole big display,” said Acacia.

She bought the ring a week before, and Amanda wanted perfection. “I wanted to put candles on the dock, and have her go out, and I had all these plans,” said Amanda. “I had a note written, and it was in my wallet for a month.”

Yes,  Amanda had it all planned, but you know what they say about the best laid plans…

“I wanted to wait until sunset, but I couldn’t even wait for sunset,” she said. “My sister had planned to call her upstairs when I had little candles lit and flowers and stuff. I had this whole speech planned, and my sister’s in the other room listening and I’d had it planned for a year, and I was like, ‘uh. I love you. You know that I love you right?’ Then I got down on one knee, and I asked her to marry me… And she said, ‘of course I will.’”

There is some dispute about who cried. Acacia says Amanda. Amanda says Acacia and Kawisaronkwas. Either way, there is no dispute about who cried last fall at the wedding day.

The Eastern Door asked for one memory from the ceremony or reception.

“Trying not to friggin’ cry up there,” said Amanda. “I was telling myself, ‘don’t sob. don’t sob…’ I had my back to her and she was coming up the stairs and my sister said, ‘K, you can turn around now,’ and then I cried.”

“She just bawled. It was so good,” said Acacia, who was the much cooler of the two.
“I remember feeling so calm the whole day, and so surprisingly calm because I knew it was so the right thing to be doing.”